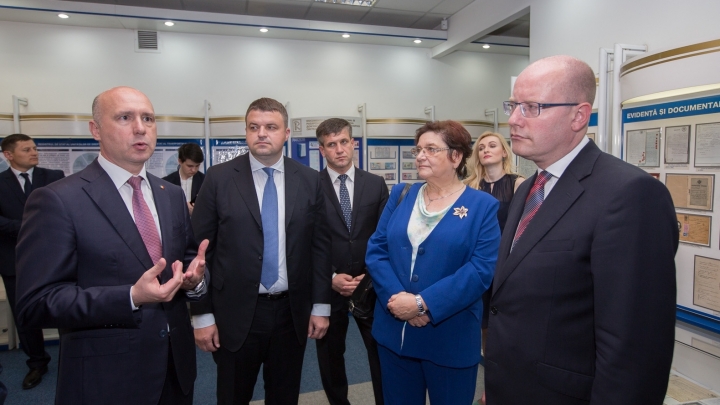 Czech prime minister, Bohuslav Sobotka, was impressed by the level of development of the state informational registers in Moldova.

The ministers have visited the Identity documents concluding centre, where they were informed about the used technologies, applied informational system, and about the reception of requests and issuance of identity documents, in compliance with the highest international standards.

Also, the had the possibility to see the evolution of identity documents from different time periods, their samples being placed in the museum of the enterprise.

During the visit, the director of IS CRIS “Registru”, Sergiu Railean, talked about the successful collaboration between the enterprise and Czech partners, mentioning that the paper used for documents is imported from Czech Republic, and at production of the registration plates for cars were consulted Czech authorities experienced in this field.

A separate subject of discussion was the Web access informational system, which ensures the interconnection of databases, offering to public authorities the possibility to access the needed information in electronic format.

In this context, the prime minister Bohuslav Sobotka has appreciated the progress of Moldova in this field and said that our country’s experience might be useful for Czech Republic.

Pavel Filip has stressed out that this modern system has simplified the adoption of visa-free regime with EU for Moldovan citizens.