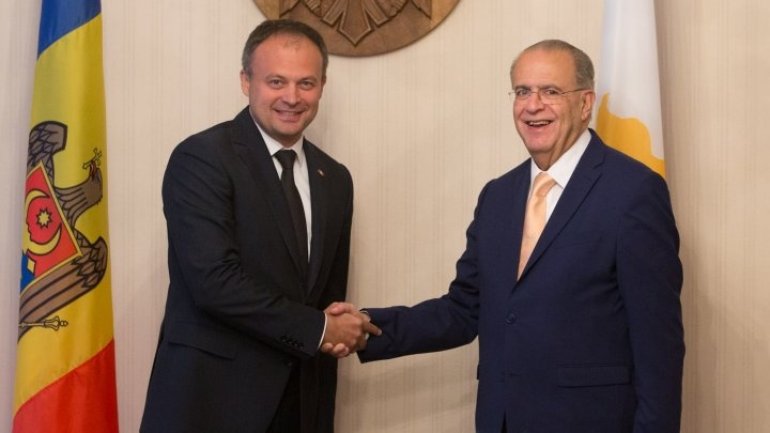 Cyprus will continue its support for Moldova's European integration, moreover, the country will send an objective message at the Eastern Partnership scheduled in November.

The statement was made at the meeting between Moldovan Parliament speaker, Andrian Candu and Minister of Foreign Affairs of the Republic of Cyprus, Ioannis Kasoulides who is paying working visit to Moldova.

"I'm sure the objectives aimed at European integration of Moldova will be achieved through patience and great effort", said the Minister of Foreign Affairs of the Republic of Cyprus.

In this context, the Parliament president referred to the authority efforts to implement Association Agreement ensure synchronization of Parliament and Government.

"The Roadmap for the Reform Agenda, now implemented by the Parliament and the Government, reconfirms Moldova's commitment to carrying out the reforms be the end of this year in order to give citizens benefits.

"We have all the political support in implementing the Association Agreement as a priority, so that the Republic of Moldova can get a clear perspective of European integration, "said Andrian Candu.

The meeting also discussed the importance of strengthening parliamentary relations between the Republic of Moldova and Cyprus, especially the organization of discussions between the members of the Friendship Groups and the parliamentary commissions, including in the context of marking the 25th anniversary of diplomatic relations.

The Cypriot official sent a message supporting the sovereignty and independence of the Republic of Moldova and efforts to ensure the territorial integrity of the country.

In his turn, Andrian Candu said that the negotiations were in the "5 + 2" format and the Republic of Moldova was open to take over Cyprus's experience in conflict resolution.

Likewise, the Speaker announced that the authorities requested at the UN General Assembly to include on the agenda the subject of the withdrawal of foreign military forces from the territory of the Republic of Moldova.