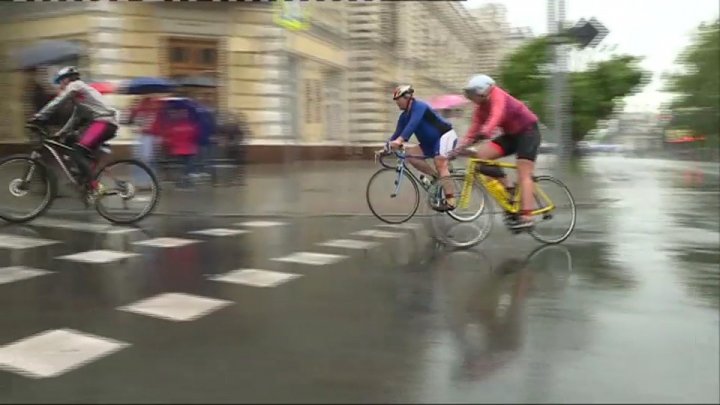 A cycling race, attended by hundreds of people, took place today in the capital. Athletes could choose two routes: one 30 and another 60 kilometers. Because of the rain, the amateur competition, which was attended by more than five thousand people, was delayed for another day.

Before starting on the route, the participants did a heating exercise.

The start of the race was given to the Great National Assembly Square. The route was not an easy one, because the participants had to face the rain, and some of them even had bad luck and fell off the bike.

The 30-kilometer race had two winners in different categories. The winning mountain biking was Andrei Vrabie. The athlete, who has been practicing this for 12 years, was also the winner last year and says he was sure he would be the first.

"It was difficult because the mark on the road is very slippery and it was necessary to pay close attention and caution when entering the turn", said Andrei Vrabie, winner of the race 30 km.

And in the category of cycling on the road, the first was Veaceslav Rusnac from Balti.

"Today, they have won not only the most powerful ones, but those who have technicians to drive the bicycle for such a long time," said Veaceslav Rusnac, winner of the race 30 km.

The winners were also two women. Anastasia Matreneţkaia from Chisinau participated for the first time at such a competition.

"I did not expect, I have some undeniable emotions, it motivates me to go further," said Anastasia Matreneţcaia.

After racing, the guests could relax with a massage. The organizers say that the number of participants is growing yearly.

"Promoting sport among amateurs in the Republic of Moldova. We want to demonstrate that sport can be accessible for everyone, not just for those who perform," said Tatiana Tutunaru, organizer.

The Chisinau Criterium race was organized by Sporter.md with the support of the City Hall. The event reached the fifth edition.
AFLĂ imediat Știrile Publika.MD. Intră pe Telegram