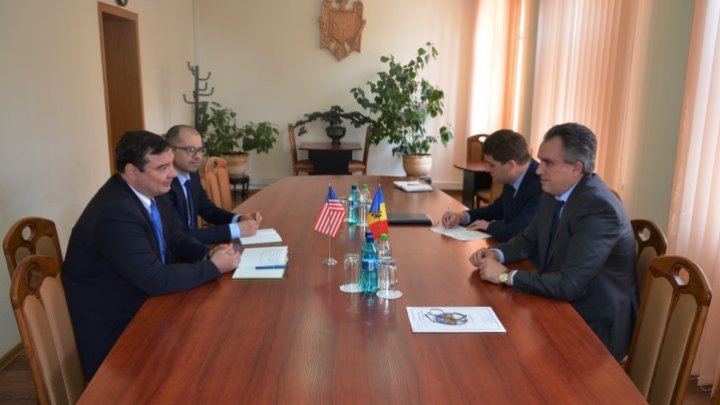 Customs Director General Vitalie Vrabie had a meeting with Robert Pazos, Counselor of the EXBS (Export Control and Border Security) Program for Moldova and Armenia, financed by the US State Department.

The parties met to evaluate the implementation of previously implemented projects due to the Program, as well as to identify new opportunities for collaboration.

During the talks, Customs Director General Vitalie Vrabie thanked the representatives of the EXBS Program for their consistent support to the Customs Service throughout the cooperation period.

In this context, we mention that the Customs Service has benefited from numerous technical and methodological assistance projects, funded through the Program.

Thus, in 2012, the Customs Service received three scanners for checking the luggage of individuals. Subsequently, in December 2017, with the support of the same Program, five mobile scanners were put into operation. At the same time, for the June-August of this year, it is planned to donate three more efficient scanners for the control of luggage of individuals, as well as two minibuses.

The program also includes the organization of training courses and study visits for the institution's employees, as well as assistance in carrying out maintenance work.

"At the same time, we need to realize that, with the increase of cross-border flows, the risks inherent in this process arise.

That's why we need upgrades to all chapters, whether we're talking about infrastructure, control equipment, or IT solutions. "Said Vitalie Vrabie.

In reply, EXBS Counselor for Moldova and Armenia, Robert Pazos expressed his readiness to examine the possibilities of assistance, while appreciating the commitment of the Customs to strengthen its institutional and operational capabilities in the areas of responsibility.

The mission of the EXBS Program is to prevent the proliferation of weapons of mass destruction and advanced conventional weapons by providing assistance in strengthening national export control systems of states that are in possession, producing or delivering strategic elements, and States through which these elements could be transited.