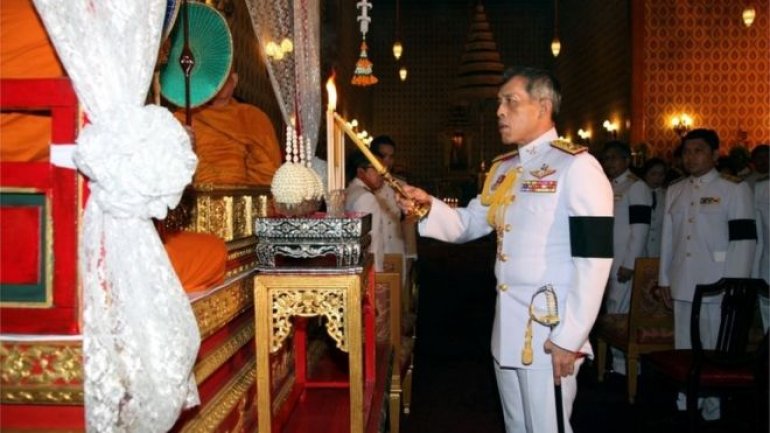 Former Prime Minister Prem Tinsulanonda is standing in as regent.

Current Prime Minister Prayuth Chan-ocha sought to reassure Thais about the succession in a TV address on Saturday, saying they should not worry.

This issue was discussed when Crown Prince Vajiralongkorn summoned the regent and Gen Prayuth for an audience, according to Gen Prayuth.

The 64-year-old crown prince "asked the people not to be confused or worry about the country's administration or even about the succession", Gen Prayuth said in his TV statement.

"He said at this time everyone is said, he is still sad, so every side should wait until we pass this sad time."

Questions about the crown prince's capabilities have been raised in the past, although the strict lese-majeste laws prevents any open discussion of these.

Gen Prayuth took power in a military coup in 2014 which overthrew the civilian government. He has promised elections next year.

The monarchy is seen as a unifying force in Thailand at times of political upheaval and King Bhumibol, who died aged 88, was a figure revered by many Thais.

The military government has made clear that Crown Prince Vajiralongkorn will be the new king but it just isn't clear when this will happen.

The military has traditionally been intensely loyal to the monarchy.

Thailand is beginning a year of official mourning, and entertainment such as TV shows and sports events has been cancelled or toned down.

Many Thais are wearing black and mourners have continued to converge on the Grand Palace in central Bangkok to pay their respects to the late king by signing a book of condolences.

It is unclear when his cremation will take place but it is not expected until the official one-year mourning period is over.