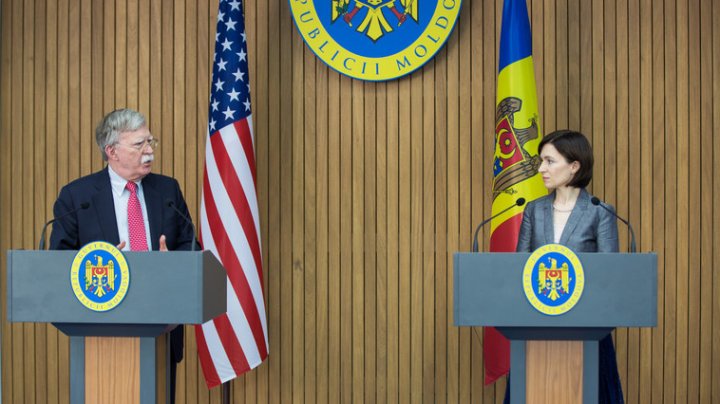 Two events of a special importance have taken place in Moldova for the last days. The arrival of the Minister of Defense of the Russian Federation, Sergey Shoygu, and the visit of John Bolton, adviser on security problems for the President of USA, Donald Trump.

As a whole, the picture looked as follows:

Shoygu came with a delegation of 40 people, enjoyed a program that included decoration ceremonies, went to Transdniestria, where the Russian Federation keeps its occupation troops, had discussions at the highest level with Dodon, even though at this moment the official position of the Government of Moldova is saying that the visit of Shoygu is a private one.

To add a little salt and pepper on this visit, we have also seen the position of the Moldovan Ministry of Interior that played the shell game pointing out “look, we have an official visit, which is not actually official”. The investigation that will be held between affines will completely define the public opinion.

On the other side, Bolton came without further ado, without a numerous delegation and, moreover, he made several important specifications. While Shoygu abstained from delivering any messages – we found out from Dodon about the issue that the Russian Federation might help eliminating the munition from Cobasna – the adviser of the American President did have some key messages.

The most important one is the following:

The message was extremely clear and I believe that it doesn’t need to be much commented. The USA knows what is in the region, it saw the changes over time. Moreover, no one from the architecture of the Moldovan state (here, I am relating specifically to the pro-European area) doesn’t need to forget that USA is in partnership with Romania and that Romanians know this region best. The fact that Bolton comes in Moldova now, with these two messages, after President Iohannis paid a visit to the White House, is not a simple coincidence. USA and Romania are taking counsel together including on the dossier on Moldova and, even if many things are not said, this doesn’t mean they are not registered.

The State Department is not the institution which Dodon believes he can trick as he wants. Expertize there is to the rank of law. The monitoring they make over time are part of an analytical process and decisional process.

If we are to look a little to what happened in the last years on matters of defense, we could see a picture that says everything. I will describe in few words:

1) President Igor Dodon opposes to the participation of the Moldovan troops to the joint exercises with USA. As a consequence, the Republic of Moldova faced the risk of suspension of American support of almost 13 million dollars, half of the annual budget of the army, offered in the frame of the program “Foreign Military Funding” and destined to the purchase of military equipment for the needs of the army.

2) Moldovan Minister of Defensee Anatol Shalaru discusses with Ukrainians, reaching a consensus. Ukrainians agree with creating a “green corridor” for the withdrawal of the Russian troops. Dodon doesn’t agree, and the process of eliminating Shalaru begins.

3) Dodon opposes the appointment of Sturza in the position of Minister of Defense, aiming at appointing his person. Dodon is suspended.

4) Eugen Sturza launches an ample process of modernization of the army. He purchases munition, first time after two decades, replaces the munition with the NATO type, so that Moldova does not remain dependent on the Russian armament. Military exercises for the training of troops are organized.

5) Dodon tries to sabotage the Minister of Defense. It gets to a war in the trenches, but far from the public eye. Sturza obstructs even a visit of Dodon in a military unit.

6) At the Government level, the shift of the Russian military commanders from Transdniestria is blocked. Russian officers are forbidden to enter the Moldovan territory when they want to make the rotation.

7) The Government asks at UN the withdrawal of Russian troops.

Maybe there are also other gestures made behind the scene, away from the public eye, but the conclusion is only one: during the last years, Moldova didn’t fall on its knees in front of the Russian Federation.

Now, the “occupationist” is welcomed, enjoying the organization of a visit with the protocol secured, is permitted to decorate the occupation troops, the so-called peacekeeping troops.

How do you think all this is seen in the foreign chancelleries?

Dodon’s vision is well-known, his incredible duplicity, his perversity. As a matter, he doesn’t even hesitate to show it. We can see it all in the following statement:

The agreements we have with the EU give us a possibility to leverage their experience, their funds, in order to change the situation in the Republic of Moldova.

The pro-EU camp from the Government of Moldova needs to know that you cannot treat the West as some “sponsors” who have the obligation to offer, and to have no backbone in front of the East. You cannot “profit”, you can benefit the support, but only if you play fairly with everyone.

You can “benefit” the support, if you also show your interests. Don’t ask someone to defend your interests, to “sponsor” you, when you laugh in a restaurant in Moscow enjoying the relaxing card that you were given.
AFLĂ imediat Știrile Publika.MD. Intră pe Telegram