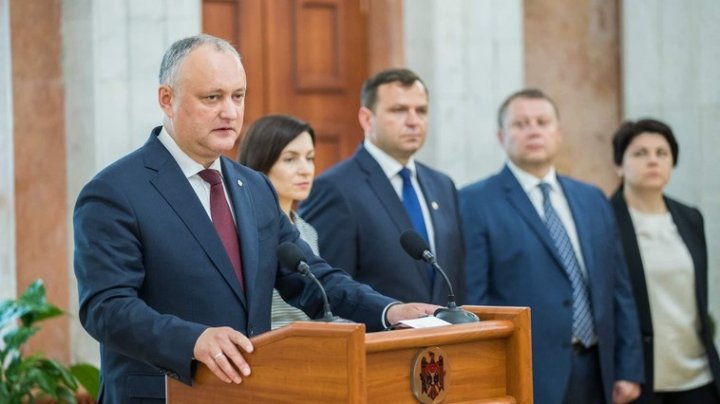 September 16 marks 100 days since the Sandu Government made the oath in the Parliament. Maia Sandu will come with a report in front of the citizens to present its achievements. We can say that the grace period is over. 'Honey moons', when citizens are more indulgent with the government, are over. These 100 days have been hard, we could see how the political 'players' in the alliance sit on the ground and try to position themselves for the future. The PSRM-ACUM alliance is jointly governing, only that they separately split the achievements and the failures and this because the electoral pools of the two forces are completely different. It is an alliance of conjuncture, an alliance against the nature, but which some see as a solution for the moment.

In this period, of 100 days, there have been two big agenda on which ACUM-PSRM followed or at least this is what they left to believe: the foreign chapter and the de-oligarchization.

Each camp tries to show that it makes a step back and wants to improve the relations with the Russian Federation, respectively with EU. PSRM as well as ACUM wanted to offer citizens an armistice on geopolitical problems.

Probably, in Berlin as well as in Moscow have been decided that each camp shows openness one to another, to make some diplomatic gestures for citizens so they can see the openness the Moldovan rulers benefit. Here we can note the visit of the Minister of Foreign Affairs to Moscow, the welcoming of the Minister of Defense in Chisinau, the welcoming of Dodon in Brussels.

The pro-European political actors started to show openness towards the Russian Federation. They passed over the tough positions, they don’t speak anymore about the GOTR troops and they recognize the role of the Russian Federation as a mediator country, according to the statements of Popescu, on his Facebook account.

'Regarding the issue of the Transdniestrian settlement and the role of the Russian Federation, as a mediator country in this process, I have reiterated the priority of the withdrawal of Russian troops dislocated in the Transdniestrian region, the presence of which on the territory of the Republic of Moldova comes against the principle of neutrality stipulated in the Constitution of the country'.

President Dodon was welcomed in Brussels. There were taken pictures, given diplomatic messages and thus pointed the support Moldova has.

Yesterday, almost at the end of 100 days, the European Commission made a press release that salutes the “essential democratic reforms” that have been implemented.

'The new government of the Republic of Moldova started an important program of reforms, aimed at strengthening the democracy and the rule of law in this country. We hope that the authorities will honor the commitments they assumed and will put in practice the ambitious agreement between EU and Moldova, in the benefit of our citizens. At the EU level, we declare our availability to continue to give assistance and support to the Republic of Moldova in this process because we cherish very much our friendship'.

'We have already retaken, since July 2019, the budget support payments; as well, we have signed with the government financing agreements on sustainable local development and the rule of law, which will allow for the implementation of the programs that aim at offering Moldovan citizens concrete benefits. We are ready to enhance even more the financial support and counselling, as a response to the solid program of reforms of the government. All these are clear signals of our appreciation regarding the already taken measures and constitute an encouragement offered to the authorities to continue the ambitious path of reforms'.

All these signals come now, as a help for the Sandu Government. It is a support openly shown by the high representatives of Brussels. It is normal to be this way. The European Commission is at the end of its mandate, it has to check on a success, the new project started in Moldova, the PSRM-ACUM partnership, which has been made under the authority of EU, at the German-Russian initiative.

The Commission marks, assumes a success, helps the Sandu-Dodon government and moreover offers a “diplomatic space” towards the former government, the success of which in the economic and banking sectors it recognizes.

Maia Sandu and her Government promised will clean the country of oligarchs, will hire professionals, integral people, on competition merits, will eradicate the corruption. I know messages in campaign are always 'exaggerated', to catch the electorate, only that there is a big discrepancy, a huge abyss between what has been said and what has been done.

The fact that Dodon named his people in his manner, the fact that Nastase and Popescu on the first day brought their kinsmen and appointed them in different positions, the appointments for the leaderships of the Anticorruption Center, of the Constitutional Court, of the Intelligence Service, can not be called actions of de-oligarchization.

Maia Sandu has to come with a complete report that says which are the measures of de-oligarchization that have been taken until now, explains where have the errors been. Otherwise, she will not be able to fight the image that Dodon is the one who seized the key institutions of the Moldovan country, and the de-oligarchization process is actually a process of 'dodonization'.

For now, the real image of Moldova is completely different of what is communicated even by the EU officials, whose interest, now at the end of their mandates, we can understand. In the end, only one reform has been made, if we can call it so, the change of the electoral law, the return to the proportional vote. Between us, the mixed system is a purely democratic voting system and maybe if it hasn’t been introduced by Plahotniuc together with Dodon no one would have contested it.

As for the rest, in Chisinau wasn’t seen enacted measures or reforms, but a struggle to occupy a space that was left free, many political messages, main actors who make cheap games of PR, the dissemination of some revanchist messages.

From the economic perspective of the Sandu Government, very little has been seen, almost nothing. We don’t know what exactly the Sandu Government proposes. Some contradictory measures were adopted, it was decided to tax the 'meal tickets', the VAT for HORECA was raised, the First House and Good Roads programs were abandoned. There really may not be the necessary funds, there may be some impediments. If so, the Government needs to come to present the situation and its view.

We are waiting for the report that some officials will do, maybe we will see there that much has been done than communicated and that the reality is other than the public perception at this moment. Until then, the public opinion can not form its opinion only after what is seen.
AFLĂ imediat Știrile Publika.MD. Intră pe Telegram