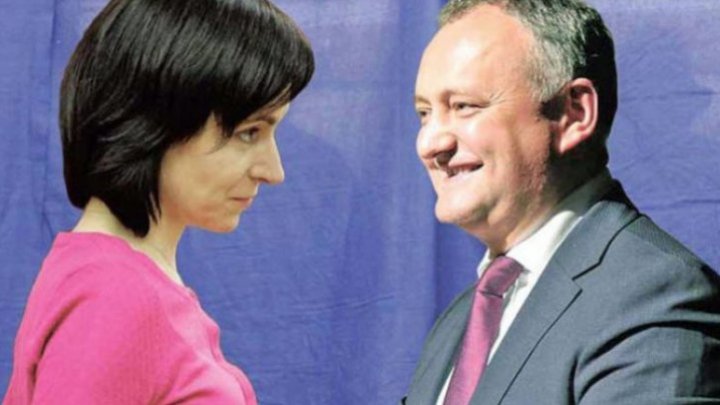 The political consultant Cozmin Gusa thinks that Maia Sandu and ACUM were caught in a trap from which they will not longer be able to escape, accepting an alliance with Igor Dodon at Chisinau, especially within a powerless Government.

The consultant thinks that EU made a fatal mistake, including mercantile interests within the relationship with Russia. Gusa thinks that Klaus Iohannis had a proper reaction by not accepting the PSRM-ACUM alliance and that Romania should take part at the negotiations about Moldova's future. For now, the snap election is the only solution.

Cozmin Gusa doesn't like the alliance between Maia Sandu and Igor Dodon, two fighting politicians, who considered each other as 'traitors'.

'Obviously, Dodon never changed since 2017 in Maia Sandu's vision. Maia has changed, unfortunately, but if she would had changed after some negotiations with Romanians, we could praise new Romanian politics. I have the information that Maia Sandu didn't consult with Iohannis, nor with PNL. Imagine Europe's map, the borders between Romania and Ukraine and how vital it could be for Putin to control Moldova', said the consultant on Sunday evening within a talk-show at Realitatea TV.

'Sandu is caught in a trap and she will loose her trust. Her voters are against Igor Dodon. Those hurrying her to make those decisions made a great mistake. She had the chance to ally with Plahotniuc's party', mentioned Gusa.

Why she's been caught in the trap? Because of 'greed', Gusa thinks, referring to the functions given to ACUM in the Government.


The 'brave declaration' of Iohannis

Gusa greeted Iohannis' cautious position, when not supporting Sandu's Governance, unlike how EU did. This position draws the attention on the Romania and Moldova's relationship importance, Gusa thinks.

'Klaus Iohannis made the bravest declaration within his presidential mandate. Might seem banal, but he didn't recognize the Maia Sandu Government. This made Iohannis to position himself and Romania: 'We want to be asked, because we do not take for granted the things happening there'. Today's Iohannis' declaration disagrees with EU and Russian Federation through Kozak official declarations, who thanked EU and USA for the positioning, meaning  humiliating the foreign politics of EU and USA, by giving thanks. Because the Russian influence in Moldova is a big, historic and cultural one, and all this mess happening in Chisinau is useful for the Russian Federation', pointed out Gusa.

The consultant observed at the same time the supporting declarations of Traian Basescu and Dacian Ciolos. In Basescu's case, Gusa declared that he understands his 'skills', but in Ciolos' case, the consultant thinks that it's about not knowing the situation.

Gusa underlined Romania's incapacity to act in the last three months. 'In the last 90 days of crisis, Romania didn't mess and this is not excusable. Moldova is requesting for solutions from Romania. No one answered the call for help and Maia Sandu came to power and did her interests', said Gusa.

Russia's eyes on Ukraine. The transnistrean conflict might recur

Which are Russia's intentions? Gusa points out to Ukraine.

'Plahotniuc's last years of economic network had the Petro Porosenko's Ukraine direction. The alarm sign for Plahotniuc was when Porosenko left the power for an actor monitored by an oligarch with strong connections with Russia and who named the people in the Parliament. After that, Plahotniuc got alarmed, because his game was based on the Porosenko's Ukrainian network. Imagining Moldova's map, we all know that Russia is interested in Ukraine, not Romania. That long Moldovan border with Ukraine present much interest for Russians that want to influence the geo-politic game in Ukraine', said the consultant.

Gusa thinks that Chisinau's actual crisis can be solved with new elections. Regardless this solution, the situation can worsen to the moment when the frozen transnistrean conflict will reburst.

'EU made a fatal mistake'. What can Romania do?

Gusa considers that EU made a mistake and one of the reasons are about the mercantile interests of Germany with Russia. This could bring Moldova into Russia's arms.

'Plahotniuc it's a politic and an oligarch driven by his ascension in Romania. Iliescu's or Basescu's, or Ponta's, this type of Romania has always preferred Plahotniuc and I wonder why today this is an avoided theme. I had a consulting project in 2010, when elections occurred. Beside me was Dan Dungaciu, Mihai Ghimpu's counselor. It took a very heavy effort to stop Voronin from winning more than 50% and that European alliance to have a majority of 53%, that didn't bring Moldova in Moscow's arms.  Today EU made a big mistake because of Germany's urgent economical interests. They suggested Maia Sandu and Andrei Nastase to realize this alliance that erases from Sandu and ACUM a big voting potential, what Russians always wanted. Dodon's supporters are less pretentious at such agendas and it will cost almost nothing because of his shy and embarrassing behavior. Even Africa haven't recorded such a corrupted persona', says the consultant.

Gusa underlined the importance of Romania's border with Russia. 'The happening things suggest that the border will be on the Prut river, instead of Nistru. We are losing terrain because even USA isn't interested in this territory. Because of their preference to discuss with Plahotniuc. They discussed less with Maia Sandu and didn't even bother to discuss with Bucharest', said Gusa.

The consultant thinks for Romania to better position itself to negotiate in September voting.


Putin, the 'loser of service', according to media

Gusa thinks that in an unexpected way, the loser is Vladimir Putin. 'I can hardly remember when Putin was humiliated and remained without reaction. A president of an ex-Soviet republic invokes him as a trader, reminds about criminal files, about derisory money of Putin's Russia. I don't remember to ever happen such things to Putin', said Gusa.

'Andrian Candu said in the last evening that one of Russia's request was to freely diffuse Russian TV channels in Moldova. On the other side, we cannot observe Plahotniuc's urge to preserve the power. But we must remain attentive for the agreement to not hide a much sophisticated strategy to occupy this territory and to offer him the possibility to control Ukraine and NATO borders', warned the consultant.

Maia Sandu's Government, a powerless one

The consultant thinks that the Maia Sandu Government doesn't have any chances to survive. 'I don't think there to happen much. EU has only few possibilities to pressure Romania. Fewer than Romania has. Russia will mind it's own business and will not give advantages to Maia Sandu and her Government. USA doesn't have any interests. Maybe Iohannis' alarm will resound louder at Washington, that will determine Washington to come and consult with Romania.

'Maia Sandu's Government is a powerless one. The decisions were invalidated by Parliament's dissolution and Plahotniuc's network wasn't scared by the Maia Sandu and Dodon's words. According to media, Plahotniuc holds about 80% of the media institutions of Moldova. The communication that want the Russians or Maia Sandu to make is marginal', said Gusa.