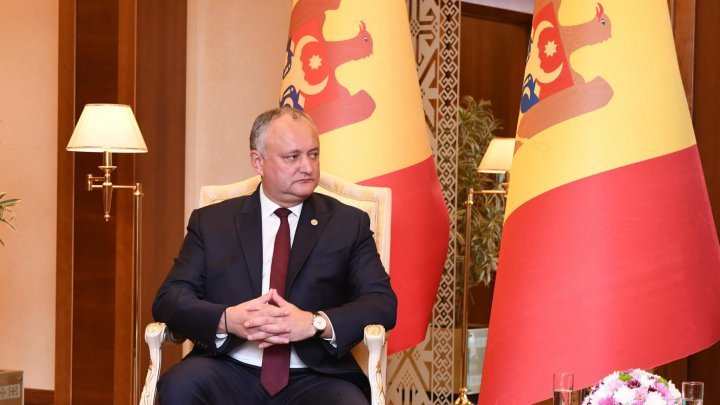 The absence of a cross in the eagle's beak on the Moldovan flag arranged in the meeting of Moldovan President Igor Dodon with his Uzbek counterpart Shavkat Mirziyoyev has stirred controversy.

Many people are upset and claim this would desecrate the state symbols.

However, the Moldovan presidency spokeswoman, Carmena Sterpu, noted the cross was in its place, just it blurred in the photo.

According to the chairman of the National Heraldic Commission Corneliu Popovici, this was not a breach of the law.

It is not the first time, when the state coat of arms has been changed during the official visits of the Moldovan president. In 2017, the flag was also changed at the opening of the Women's World Chess Championship in Tehran, Iran, an event Igor Dodon attended. He later noted the host country assumed the responsibility for organizing the event.

According to the legislation, the yellow stripe is charged with the national arms on Moldova's flag. The Moldovan arms, adopted in 1990, features a dark golden eagle holding an Orthodox Christian cross in its beak. Instead of a sword, the eagle is holding an olive branch, symbolizing peace.