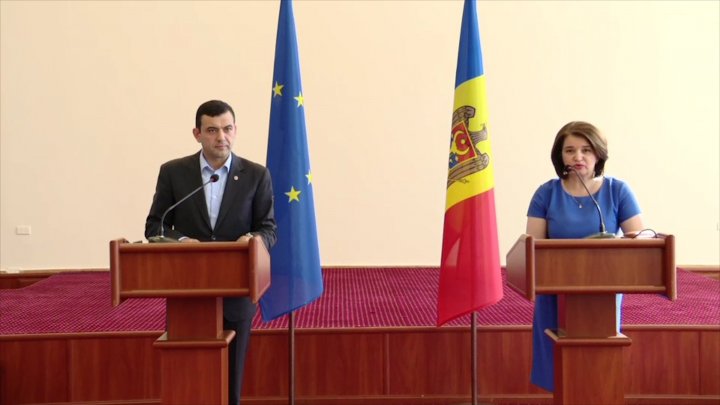 Minister of Economy and Infrastructure Chiril Gaburici and Minister of Education, Culture and Research Monica Babuc held a press briefing where they announced which company won the contest to build the Chisinau Arena as well as the progress of the project.

Thus, Chiril Gaburici mentioned that 75% of the shares are already implemented.

"Following the announcement of the tender submitted in the contest for selecting the public private partner for the Chisinau Arena, I would like to inform you that the construction of Arena Chişinău has been carried out according to the plan established since March 2018.

Our interest is to go through it correctly, with certain steps, according to the law, so that our dream will come true. In practical terms, I want to say that we have the following picture: Of the 44 actions that have been set by the working group at the beginning of this project, 33 actions or 75% of the actions are already implemented.

Next week the land will be deforested. The equipment and the transport were on site. Another action is the completion of the land separation, here I am talking about the 10 hectares. 10 hectares will be separated from the 69.2.

During July and August, we plan to work with the private partner and technical preparations in terms of obtaining the necessary authorization to launch the construction and the construction site.

According to the plan, the end of August must be the moment when the building site opens. I want to emphasize the importance of this project. We believe that this project will also give a boost to tourism. The contest was organized according to the Government's decision. In order to conduct the competition, a selection committee was set up, composed of representatives from several entities. The Commission was responsible. We used all the diplomatic missions, "said Economy and Infrastructure Minister Chiril Gaburici.

The company that built the mall on the viaduct and the luxury hotel Radisson Blu Leogrand is the winner of the contest to raise the Chisinau Arena.

This is the Turkish company SUMMA, which has world-class construction experience.

The company has experience in building sports edifices, similar to the public-private partnership, with at least one project being developed over the past 5 years. These are sports complexes in Senegal and the Russian Federation.

The company's annual average turnover from construction activities is at least 50 million euros per year over the past three years.

The company has access to funding lines of at least EUR 50 million from reputable banking institutions.

We have the joy and honor to announce that the commission unanimously voted the award of the public-private partnership project for the design and construction of the Multi-functional Arena of International Interest for the bidder of the competition SUMMA in Turkey.

We would like to contend that we enjoy the attitude and responsibility of the winner of this contest and the fact that we have succeeded in identifying a company that accepts the severe rules, I would say even drastically set by the Government in aspects of terms of project realization, the involvement of the state in this project and others.

Our interest was to have serious bidders to accept our vision of this project and to understand that we are sticking to certain standards and certain advantages that Arena Chisinau has to bring to our country.

We also note that we are glad that the project will be carried out by a strong and experienced international company, a company we know, a company that has activity in the Republic of Moldova. A company that knows the specificity of the market and the legal base and has already demonstrated through the projects made in our country that it is a qualitative and professional company through its work and professionalism.

We mention that when signing the contract we will ensure a public event and in this sense we will invite the civil society to participate in this memorable event, "Monica Babuc said.

PUBLIKA.MD reminds that the ultra-modern complex will be built on a ten hectare plot of land in Stăuceni. Arena Chisinau will have a capacity of up to five thousand seats and will be able to host various sports events, conferences, exhibitions or concerts.

The complex will host an Olympic swimming pool and tennis courts. The project is being implemented at the initiative of the President of Parliament Andrian Candu.