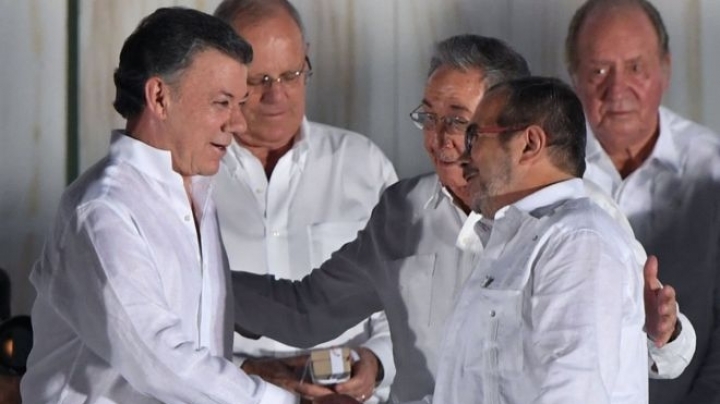 Colombian President Juan Manuel Santos has said he will donate the money from the Nobel Peace prize to help the victims of the 52-year conflict in his country, reports BBC.

He was awarded the prize for reaching a peace agreement with the Farc rebel group last month.

The deal was rejected a few days later by Colombian voters in a referendum.

About 260,000 people have been killed and more than six million internally displaced in Colombia.

"Last night, I met with my family and we have decided to donate those eight million Swedish krona ($925,000) to the victims," said Mr Santos.

He made the announcement in the city of Bojaya, in the north-western region of Choco, after taking part in a religious ceremony for people affected by the conflict.

The head of the Nobel commitee said on Friday the award recognised the president's "resolute efforts" to end the conflict.

"The award should also be seen as a tribute to the Colombian people who, despite great hardships and abuses, have not given up hope of a just peace, and to all the parties who have contributed to the peace process," Kaci Kullman Five added.

Mr Santos said he dedicated the award to "all the victims of the conflict".

The award did not include the Farc (Revolutionary Armed Forces of Colombia) leader Timoleon Rodriguez, better known as Timochenko.

He also signed the accord after nearly four years of negotiations held by government and rebel delegates in the Cuban capital, Havana.

The peace deal was rejected by 50.2% of voters who went to the polls on 2 October.

The committee acknowledged the result, saying: "What the 'No' side rejected was not the desire for peace, but a specific peace agreement."

It also said that finding a balance between the need for reconciliation and ensuring justice for the victims would be a difficult challenge.

Despite the rejection by voters, Mr Santos vowed to continue with talks with the rebels.

Government negotiators have already returned to the Cuban capital Havana for further discussions with Farc leaders.