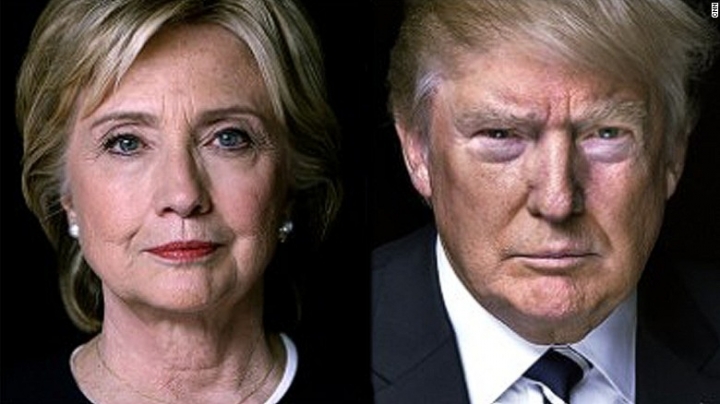 Donald Trump and Hillary Clinton start the race to November 8 on essentially even ground, with Trump edging Clinton by a scant two points among likely voters, and the contest sparking sharp divisions along demographic lines in a new CNN/ORC Poll.

Trump tops Clinton 45% to 43% in the new survey, with Libertarian Gary Johnson standing at 7% among likely voters in this poll and the Green Party's Jill Stein at just 2%.

The topsy-turvy campaign for the presidency has seen both Clinton and Trump holding a significant lead at some point in the last two months, though Clinton has topped Trump more often than not. Most recently, Clinton's convention propelled her to an 8-point lead among registered voters in an early-August CNN/ORC Poll. Clinton's lead has largely evaporated despite a challenging month for Trump, which saw an overhaul of his campaign staff, announcements of support for Clinton from several high-profile Republicans and criticism of his campaign strategy. But most voters say they still expect to see Clinton prevail in November, and 59% think she will be the one to get to 270 electoral votes vs. 34% who think Trump has the better shot at winning.

Neither major third party candidate appears to be making the gains necessary to reach the 15% threshold set by the Commission on Presidential Debates, with just three weeks to go before the first debate on September 26.

The new poll finds the two major party candidates provoke large gaps by gender, age, race, education and partisanship. Among those likely to turn out in the fall, both candidates have secured about the same share of their own partisans (92% of Democrats back Clinton, 90% of Republicans are behind Trump) but independents give Trump an edge, 49% say they'd vote for him while just 29% of independent voters back Clinton. Another 16% back Johnson, 6% Stein.

Women break for Clinton (53% to 38%) while men shift Trump's way (54% to 32%). Among women, those who are unmarried make up the core of her support, 73% of unmarried women back Clinton compared with just 36% of married women. Among men, no such marriage gap emerges, as both unmarried and married men favor Trump.

Younger voters are in Clinton's corner (54% to 29% among those under age 45) while the older ones are more apt to back Trump (54% to 39% among those age 45 or older). Whites mostly support Trump (55% to 34%), while non-whites favor Clinton by a nearly 4-to-1 margin (71% to 18%). Most college grads back Clinton while those without degrees mostly support Trump, and that divide deepens among white voters. Whites who do not hold college degrees support Trump by an almost 3-to-1 margin (68% to 24%) while whites who do have college degrees split 49% for Clinton to 36% for Trump and 11% for Johnson.