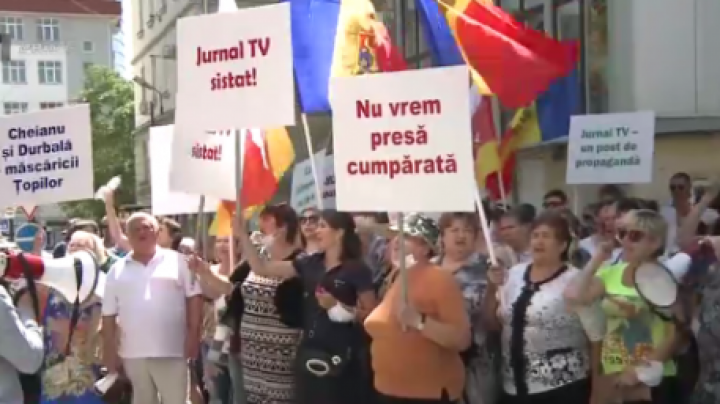 Orhei town residents surrounded Jurnal TV headquarters and demanded a public apology from the station’s administration. The administration of the television station did not come to talk to the protesters.

Residents of Orhei town considered as offensive marks used against them by Jurnal TV journalists. Especially talking about "Ora de ras" show in which the rezsdents were called "misguided" and "idiots".

"Get out and apologize to all citizens of Orhei village. They embarrassed us."

"They need to apologize."

"We are ready to come back again. We will sleep here until they come to ask for forgiveness."

This is not the first time protesters call for public apologies from the Jurnal TV administration and presenters of “Ora de ras” show. They have not yet reacted.

"They still have not apologized. The administration of this TV channel is a pettiness. Their actions are directed towards Moldovan citizens. This is a peaceful protest, but they're trying to draw us into a political game" , said Pavel Verejanu, leader of the "Pentru Orhei" fraction.

On August 8, citizens of Orhei village have submitted a petition to the Broadcasting Coordinating Council with the request to suspend the activity of Jurnal TV. BCC has promised to consider the complaint and to announce the results of monitoring broadcasts of the television station.

Meanwhile, the protesters issued an ultimatum: If by Wednesday, the administration of the station does not present a public apology, then other protests will be held on Thursday, installing tents in front of Jurnal TV headquarters.