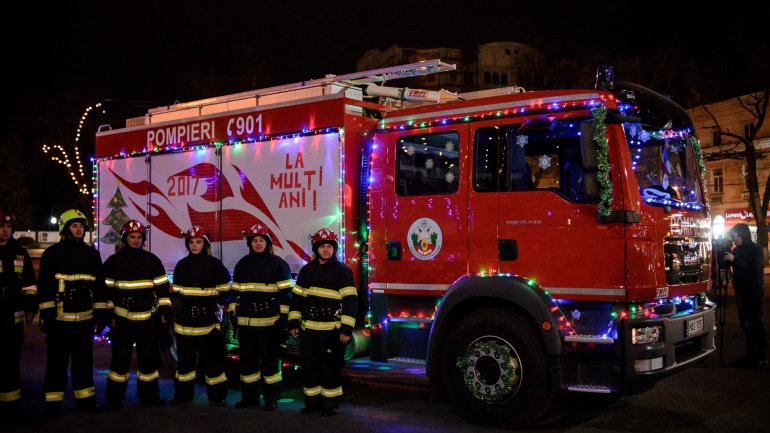 In total, more than a hundred of the 33 families will receive donations from the rescuers. The action began in the Great National Assembly Square, where people praised the beauty of cars that were decorated with thousands of lights.

The most enthusiastic are children who can't leave their eyes off the vehicles for even a minute. Some climb to the trucks and take photos.

"It's so big and beautifully decorated. I made a lot of photos".

"I love the Santa Claus and games."

"It really captivates all of us. It's totally pleasant".

After congratulating those present, the firefighters set off on their way. The rescuers firstly visited the family of Igor and Vera Grozavu with their four children.

"I want to thank everybody who made effort to surprise us. It never happened before.", said the mother of the children.

After receiving the presents, the children wanted to know the firefighters and their vehicles.

"It was a big surprise, my first time to climb into a fire truck."

The rescuers installed in Grozavu family's house and a fire prevention detector.

"We wish you did not need this detector and use it only for testing and you do not need the firefighters to intervene. We wish you a good evening and celebrate happily."

The Firefighters' Caravan aims to promote safety on the winter holidays. The campaign will run until 8 January.