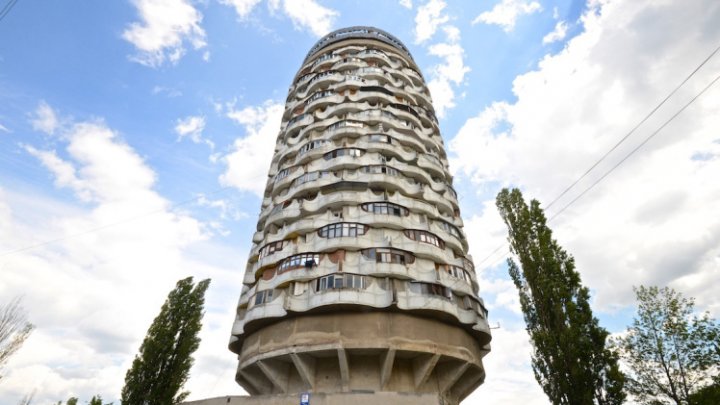 Report by Arte TV
The Romaniţa collective housing tower which was once considered as the Chisinau people's pride, has been named the ugliest building in the world by the French Arte TV journalists. They made a report about this building.
Built in 1986 to provide temporary accommodation, the building's already decaying now though it was supposed to last a hundred years.
"People still live in this concrete rotunda which at times can feel like a prison.", writes Arte TV.
The building's name, 'Romashka' («Ромашка») (Romanian: Romaniţa), means a camomile flower. It is also known as 'Corn Cob' («кукурузный початок») as it resembles a camomile flower or a corn cob in some aspects.
According to bacu.ro, with a height of approx. 77 meter, the tower was the tallest building in Chisinau. The main function of the building is to create collective housing and the building has a height of 2S + P +22 floors. The circular shape of the building and the dimensions with a vertical development were influenced by the proximity of the location to the “Valea Trandafirilor” Park.
The building is situated at 29/2 Arheolog Ion Casian-Suruceanu Street, on the periphery of the “Valea Trandafirilor” Park, near the Republican Clinical Hospital.
AFLĂ imediat Știrile Publika.MD. Intră pe Telegram