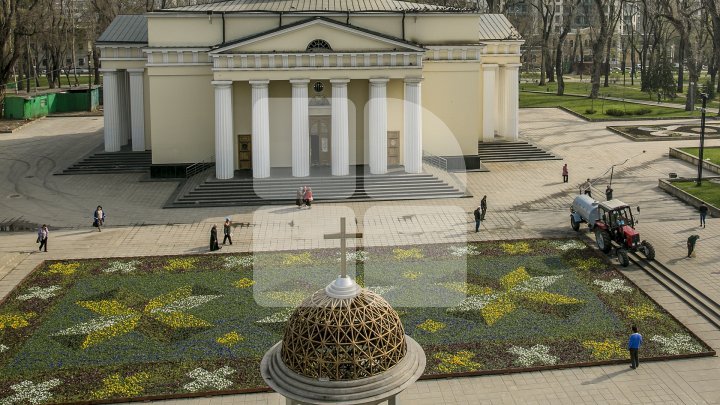 Holidays can be felt this week in the Capital.

Also read: Silvia Radu: A Moldovan flower carpet was laid in front of the Nativity Cathedral

In front of the Nativity Cathedral was laid a flower carpet. The idea belongs to interim Mayor, Silvia Radu. The flower carpet takes a total space of 450 square meters, while for its creation required over 200 000 pansies. People can enjoy the view until Tuesday, the flowers begin afterward moved to the parks from the city.

Chisinau is knows as the greenest Capital in Europe, while the City Hall's latest act only confirms it. In Botanica sector were planted 150 mapple trees, on a surface of nearly one hectare. The trees were offered by an economic agent.

This week, local authorities continued works to cover all potholes that appeared on the streets from Capital. Workers have been already in most sectors. In the Center, potholes were covered on Iurie Gagarin, Dimitrie Cantemir boulevards and Bucureşti streets. In Râşcani potholes were covered on Socoleni, Calea Moşilor and Ceucari streets, while in Buiucani and Ciocana workers have been on Calea Ieşilor and Meşterul Manole streets.