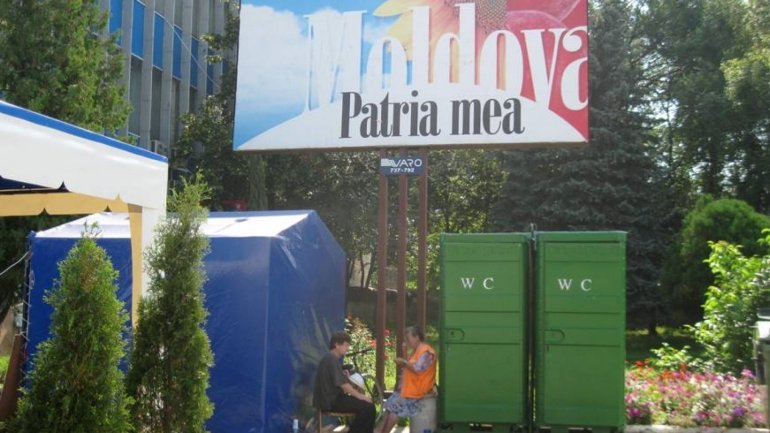 Citizens of the Capital are forced to spend minutes searching for public bathrooms in recreational areas. Once found though, people are met with horrid smell and filth. At the moment "Regia Salubritate" offers only 14 public bathrooms.

Experts from the Public Health Center from Chisinau has established that under such conditions, one public bathroom is accounted for one thousand citizens. Based on their calculation the Capital needs at least 90 more facilities.

In the Valea Morilor Park, built in 1937, people have to walk trough filth and have nowhere to wash their hands. More than that, the public bathroom for women is available only in winter.

"We try to manage as early as possible. Today a car was dispatched to was the facilities" deputy chief of "Regia Salubritate", Alexandru Bajura declared.

Experts from the Public Health Center from Chisinau warned citizens that such public facilities are very dangerous, but there is nothing they can do, as since last year they do not control them. Before then, public bathrooms used to be inspected once per year.

"There is always the possibility of people using public bathroom to catch acute diarrhea. We know that public bathrooms do not meet the sanitary norms and are too few" hygiene doctor, from Chisinau, Anatol Bârlăcioc stated.

There are also some good examples. Public bathrooms from "La Izvor" park in Sculeni are clean. Each morning  Regia "Autosalubritate" dispatches a team to clean and disinfect the facilities.

"We clean and disinfect the bathroom, take out the trash. Were we to miss a day or two, it would turn filthy."

The two bathrooms from Ștefan cel Mare central park are rented by economic agents. Those who wish to use the facilities have to pay a 2 lei fee. In exchange people are given toilet paper and a place to wash their hands. Citizens are unhappy that they have to pay, but there is nothing they can do about it.

"When you really need to go you stop caring about such things. I know it is not exactly clean. I don't spend here all day, so this fee is not much for me."

The 14 public bathrooms from the Capital are managed by the municipal institution Regia "Autosalubritate". Its deputy chief, Alexandru Bajura, discloses that they require one million three hundred thousand lei to clean the bathrooms per year. While the government offers only six hundred thousand.

"The employee's salaries cost 288 thousand lei. At the moment we have 13 people, 12 of which are women. First of all, not everybody would agree for such a job, therefore all of them are elderly. They are paid between 3 200 - 3 400 lei monthly" Alexandru Bajura added.

Most public bathrooms in Chisinau were build in 70'. According to the projects, originally they were not connected to water, only afterwards given access to the sewage. People whom the nature calls are always free to use bathrooms from local businesses. According to the law, they cannot forbid people from doing so.