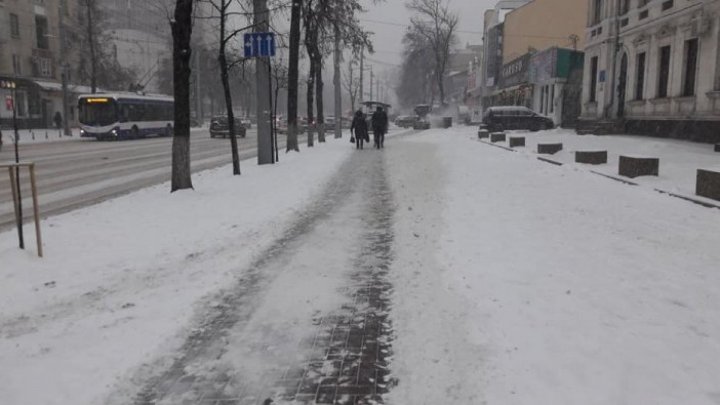 The snow has taken control of the whole country, and the State Road Administration workers work non-stop to deal with the high volume of work.

Up to this hour, 214 special machines, 1633.3 tons of anti-skid material and 294 road workers were trained in the technological process.

In order not to block road traffic, the situation on the roads is constantly monitored. Minister of Economy and Infrastructure, Chiril Gaburici, went last night to check how snow removal works take place on the Chisinau-Balti and Chisinau-Leuseni routes.

According to the minister, at the moment, the national roads run smoothly.

"We are working continuously, 24/24. It is already the second exchange of people." As you can see, the roads are circulating, all the national roads, and we assure that everyone in the morning will be able to get to work at schools, medical points", said Chiril Gaburici, Minister of Economy and Infrastructure.

The Minister urged drivers to be cautious in traffic and to make sure they had everything they needed before heading off.

Hundreds of truckers have been involved in road cleaning.

"Since the beginning of the snow we have scattered more than three thousand tons of anti-skidding material, more than 230 vehicles have worked and are working, we have yellow snow cod and on 11, we are working in two ways", said Ion Drucec, director of the State Road Administration.

And in the Capital, the Exdrupo employees worked all night.

Over the past 24 hours, 34 trucks have scattered about 380 tons of slipper on the streets of Chisinau and the suburbs.

"They will work even in the morning and during the day until the snow stops. During the day, we will have enough trucks. Also an anti-skid material is enough", said Adrian Boldurescu, Exdrupo director.

Under these conditions, drivers are urged to travel at low speeds both in and out of the towns, to keep a greater distance between cars so that they can brake and avoid parking near the trees.