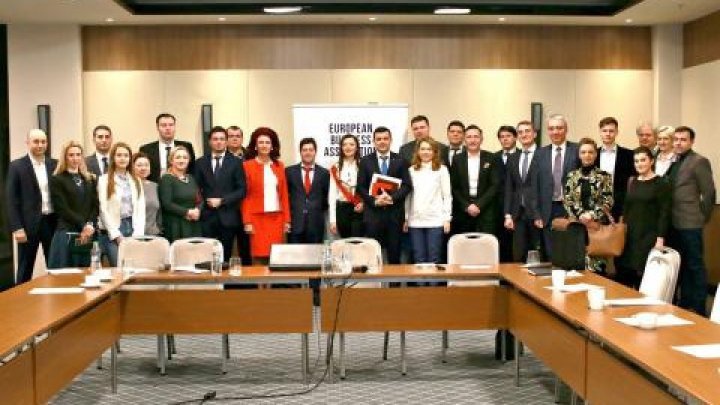 Minister of Economy and Infrastructure, Chiril Gaburici, spoke today with members of the European Business Association on economic development, reforms launched to facilitate the activity of economic agents, hardships encountered in the business environment, as well as the Ministry's priorities for this year.

During the talks, Chiril Gaburici also spoke of the achievements reached in developing Republic of Moldova's business environment.

Minister of Economy and Infrastructure mentioned that bureaucracy was reduced, namely, the number of licenses decreased from 416 to 150 in the past two years, or over 60%. The number of control bodies also reduced from 70 to 13, the law of a single 7% tax for companies was brought into force. Chiril Gaburici also claimed that in May, the single window issuing all licenses will be functional, which will speed up the process of establishing and developing a business.

"The business environment from Republic of Moldova directly contributes to modernizing and developing the country's economy. Ministry of Economy and Infrastructure will also make all efforts to create conditions favorable to establish a business, to improve the investment climate, attract foreign investors. The institution I lead remains a reliable partner for the business environment"  Chiril Gaburici declared.

Representatives of European Business Association appreciated the economic reforms and initiatives launched to simplify and make an economic agent's activity more efficient. Mentioning that Minister Chiril Gaburici also has ties with business environment and expressed their gratitude for the support.

European Business Association (EBA) in a non-governmental organization, launched by 10 founders, some of the biggest investors in Republic of Moldova. EBA aims to harmonize the national economy and business legislation to the EU standards and promote European values, as well as best management practices in the entrepreneurial community from Republic of Moldova.