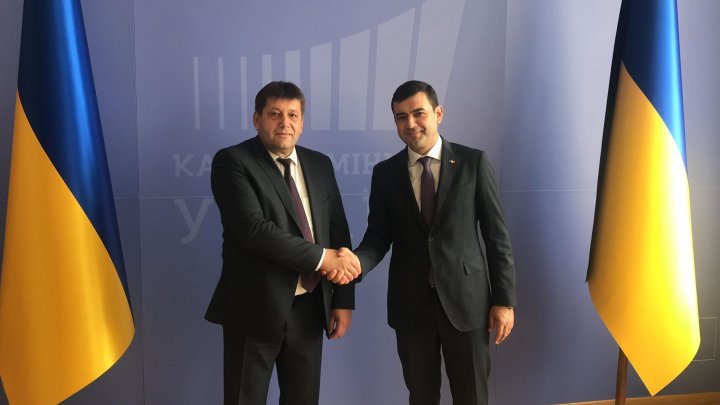 Minister of Economy and Infrastructure, Chiril Gaburici, had a bilateral meeting today with Volodymyr Kistion, co-chair of the Moldovan-Ukrainian intergovernmental commission on economic and trade cooperation.

During the talks, officials discussed aspects of bilateral relations between the Republic of Moldova and Ukraine in the fields of economy and trade, transport, infrastructure, environment, energy etc. The parties have reconfirmed their readiness for an open dialogue and an impetus for bilateral relations.

"We support the strengthening of trade and economic cooperation. Ukraine is one of the most important economic partners of the Republic of Moldova. In order to improve the level of development of commercial, economic and investment relations, we need to organize more joint exhibitions, trade missions, economic and investment forums, conferences and other events involving business representatives from both countries. It is important for the economic agents to know all the facilities and benefits that the business environment of both the Republic of Moldova and Ukraine offers, "the Minister of Economy and Infrastructure stressed.

Another topic discussed at the meeting was the need to continue the joint control at the Moldovan-Ukrainian border crossing points Maiaki-Palanca-Udobnoie and Giurgiuleşti-Reni, in order to facilitate the procedure of crossing the border control.

The realization of joint projects aimed at strengthening the transport potential of the Republic of Moldova and Ukraine in the European direction and, in particular, the construction of the bridge near Soroca (Republic of Moldova) and Iampol (Ukraine), was another subject of discussions. Infrastructure projects for 2018-2019 are agreed to be on the agenda of the next Intergovernmental Mixed Commission.

During a visit to Kiev, Minister Chiril Gaburici and State Secretary of the Ministry of Economy, Vitalie Iurcu, met with Deputy Prime Minister, Minister of Economic Development and Trade of Ukraine, Stepan Kubiv, and examined areas with potential for development of common partnerships such as transport, infrastructure, energy, industry.

In this context, Chiril Gaburici appreciated the commercial-economic cooperation between our country and Ukraine, mentioning the increase in the volume of trade.

According to the minister, in January-April 2018, the trade exchange between the Republic of Moldova and Ukraine amounted to 178.2 million dollars, up 24.6%.

According to data, in the first four months of the year, exports increased by 58.3% and imports - by 20.4%. According to the Public Services Agency, 1143 enterprises with a total investment volume of 289.6 million lei are registered in the Republic of Moldova.

"The removal of barriers in the trade between the Republic of Moldova and Ukraine will stimulate the development of trade-economic relations between states. We welcome the visit to Ukraine in the near future of experts from Ukraine to discuss punctually about four major sectors - transport, energy, industry and agro-food ", the Moldovan official points out.

Also today, Chiril Gaburici had a bilateral meeting with Deputy Minister of Energy and Coal Industry of Ukraine Natalia Boico, in which he discussed the interaction for the implementation of the Agreement on the conditions for interconnection in perspective of the energy systems of the Republic of Moldova and Ukraine with the energy system of the ENTSO-E Continental Europe.

The parties also mentioned the necessity to start as soon as possible the work of the committee created for the complex settlement of the ecological problems of the Nistru basin, implementation of the provisions of the Agreement on cooperation in the field of protection and sustainable development of the Nistru river basin, 2017, as well as the finalization of the set of documents that will regulate the operation of the Novodnestrovsk hydropower complex and the ecological situation in the given region.