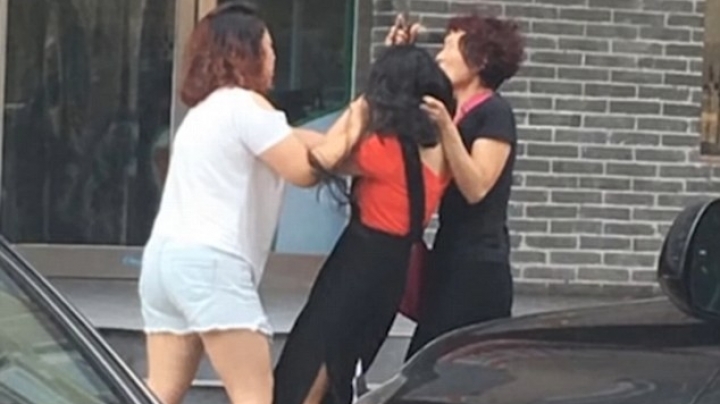 Video footage has surfaced of a vicious attack by two Chinese women on a third female who is reportedly the mistress of one of the attacker's husbands, reports Daily Mail.

The video shot in the streets of Zhengzhou, Henan Province in north-eastern China, shows the two women insulting and attacking a third woman dressed in red by forcibly ripping her clothes off and cutting her hair.

The two attackers, one who looks in her twenties and another in her forties, claimed that the third woman had seduced one of the their husbands, according to Huanqiu.com, an affiliate of the People's Daily.

The incident was photographed and filmed by several onlookers, none of whom stepped in to intervene.

In the subsequent videos posted online, the attackers can be heard saying: 'Ask you to seduce? I'm going to need to see what's actually so good about your body.'

They are seen slapping the victim, who looks to be in her twenties, several times as the victim tries to defend herself.

In another video, one of the attackers grabs the victim's hair while the other chops off bunches of it at a time.

The victim is seen initially trying to protect herself but eventually is reduced to sitting in a heap on the floor, crying.

None of the several onlookers intervened during the 10-minute incident, with some even sniggering and encouraging the attackers to rip all of the victim's clothes off.

A passerby told local media that large groups of people were watching the brawl, adding that it was 'not a very good situation'.

A local patrol officer eventually called the police, telling local media he did not feel it fitting for him to approach the group as all three were women and the victim was not properly dressed.

Local media report that all three women, who have not been identified, were all taken back to the police station.