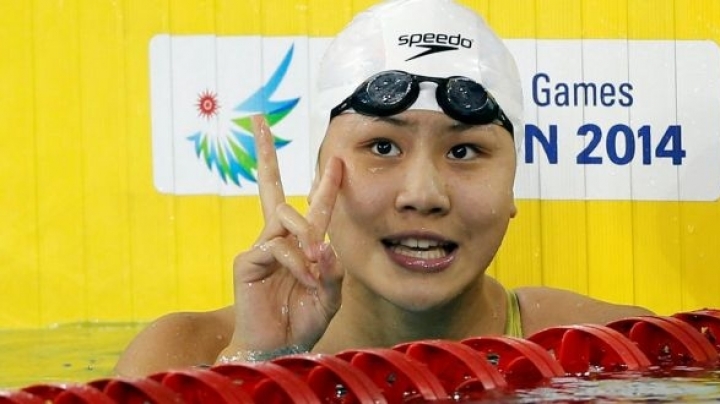 Chen Xinyi tested positive on August 7 for hydrochlorothiazide, a banned substance which acts as a diuretic. Chen's case is being considered by the Court of Arbitration for Sport (CAS) and the China Swimming Associated said it would respect its final decision, Xinhua said.

Chen Xinyi, 18, has already competed in the 100-meter butterfly event, placing fourth in the final held on Monday, according to the Rio Olympics official web site. She is next scheduled compete in the 50-meter freestyle on Friday.

Chen rose to fame at the National Games in 2013. She won gold at the women's 100-meter butterfly at the 2014 Asian Games in Incheon, and broke the world youth record in the category at the World Championship in Kazan last year.

Past doping scandals involving Chinese swimmers sparked controversy on Day 1 of the Rio Games. Australian gold medalist Mack Horton inflamed the Chinese by calling his rival Sun Yang a drugs cheat. Sun served a three-month doping ban in 2014 but it was only made public after the event. After beating Sun by a mere .16 of a second to win the 400m freestyle event on Saturday, Horton described his win as one "for the good guys."

The Australian was bombarded with abuse on his social media accounts. Chinese state media also piled in with a scathing article in the Global Times which described Australia as a country "at the fringes of civilization." Australia's chef de mission Kitty Chiller said there would be no apology for Horton's remarks.

Sun went on to win the 200m freestyle, the only gold medal for swimming so far on China's medal tally. At the end of Day 6, China had won 11 gold, 8 silver and 11 bronze.

During the 1990s a large number of Chinese swimmers jumped in the global rankings. However, between 1990 and 1998, scores of Chinese swimmers tested positive for doping -- from steroids to human growth hormones -- accounting for almost half of drug offenders in sports worldwide.

And in recent years, some former sport doctors of Chinese competitive teams have told Australian media of state-sponsored doping among Chinese athletes, reaffirming the suspicion of many critics.

However, the Chinese government has always denied state-sponsored use of performance-enhancing drugs, saying it takes a zero-tolerance approach to doping.