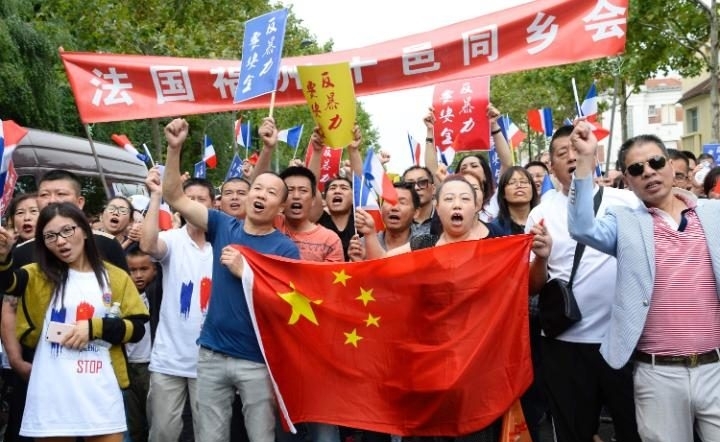 Around 1,800 people from the Chinese community in France took part in a march near Paris Sunday calling for greater security after a deadly robbery earlier this month, France24 reports.

To cries of "Liberte, egalite, fraternite", demonstrators marched through the northern Paris suburb of Aubervilliers where Zhang Chaolin, a 49-year-old tailor died after being set upon by three thieves on August 7.

The trio had tried to snatch a bag belonging to a friend of Zhang, who died a few days later from injuries sustained in the altercation.

"There are frequent attacks but we don't sue because we don't speak good French. And, we're working, we don't have time," said one protester, 26-year-old Paris bar worker Cai Jiang.

"We are appealing to the state because we are French citizens, even if we don't feel that we are considered as such," said another participant, 23-year-old shop owner Marina.

The protesters flew several French flags during the demonstration.

One banner read: "I was Charlie like you. I am Chaolin, where are you?" in reference to the "Je Suis Charlie" solidarity slogans widespread after the January 2015 attacks on the Charlie Hebdo satirical newspaper.

There has been a tripling in violent robberies in Aubervilliers targeting the Chinese community, who are seen as lucrative prey as they are thought to carry large sums of cash on their person.

Police there have bolstered their forces and recruited a Chinese-speaking staff member to improve the service to the large community in the suburb.

At the end of the demonstration, the crowd set upon a suspected robber in the protest. Police used tear gas to pull the suspect clear of the angry mob, according to an AFP journalist at the scene.