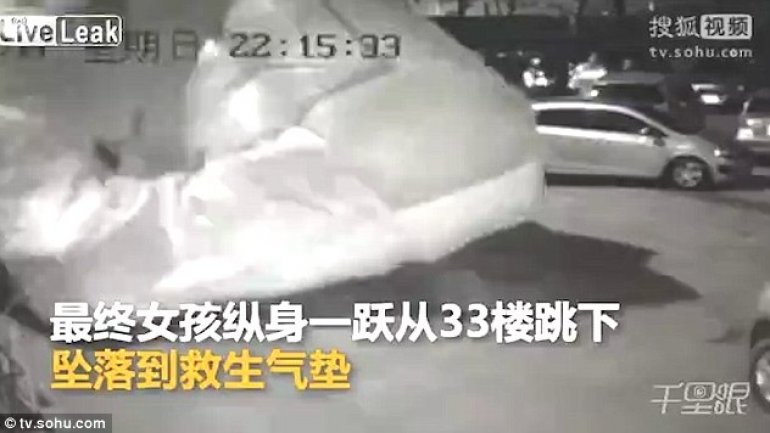 A teenage girl survived falling from a 33rd-store balcony in China after landing on a gigantic air cushion.

Footage emerged of the harrowing incident which occurred on Sunday night in Guangzhou.

Firefighters, soldiers and one of the girl's friends tried to talk her down from the Huihuang Building as she threatened to kill herself over what she described as love troubles.

After an hour trying to lure her to safety, the teenager jumped, plunging 109 meters to the ground, but thankfully a team of rescue workers below had set up an enormous air cushion which caught her, saving her life.

The girl broke her pelvis and injured her back in the dramatic fall, but her injuries are not life-threatening.

Due to the difficult position the girl was in, firefighters could not send a ladder up to rescue her, so at 8.36 pm, another crew was dispatched with an air cushion.

Officials on the roof were able to guide their colleagues below using powerful torches to instruct them where to position the air cushion.

The girl was so high up, they could not see her from the ground.