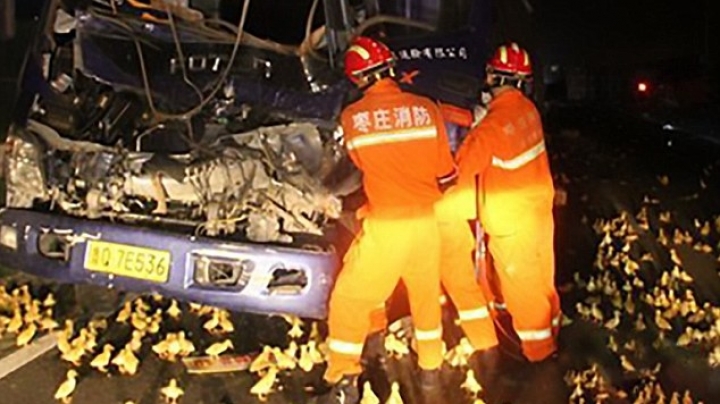 The officers arrived at the scene of the accident in Zaozhuang, Shandong province, east China in the early hours of July 26, to find ducks had escaped their cages and were roaming across the road.

Around 10,000 of the birds were being transported to a nearby farm when their large truck crashed into a trailer vehicle at approximately 12.20am. Seven firefighters reported the truck containing the ducks had been overturned during the accident, with the driver trapped in his seat, according to a report by SD China.

Meanwhile two people were also stranded after becoming pinned within the cabin of their vehicle.

The firefighters assessed the situation and quickly realised they would have to clear the huge crowd of ducklings from the road before they could safely rescue the trapped people.

Several minutes passed as the officers desperately chased the disobedient birds across the highway, in an attempt to shepherd them to the side of the road.

It was feared the continued presence of the birds on the road might cause further accidents or disrupt traffic if the problem was not resolved effectively.

The ducklings were then taken away to their destination in another vehicle, while the firefighters set to work saving the passengers and driver from their truck cabins.

All three people were eventually freed from the destroyed trucks after an hour operation, and it is not thought any of them suffered severe injuries during the accident.