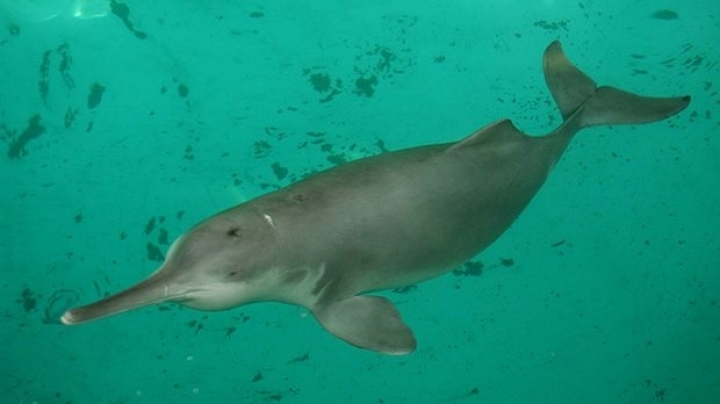 Chinese conservationists believe they may have caught a rare glimpse of a freshwater dolphin that was declared functionally extinct a decade ago having graced the Yangtze river for 20 million years, reports The Guardian.

Scientists and environmentalists had appeared to abandon hope that China’s baiji, or white dolphin, could survive as a species after they failed to find a single animal during a fruitless six-week hunt along the 6,300-km waterway in 2006.

But a team of amateur conservationists now claims it spotted the so-called “goddess of the Yangtze” last week on a stretch of Asia’s longest river near the city of Wuhu in Anhui province.

“No other creature could jump out of the Yangtze like that,” Song Qi, the leader of that expedition told Sixth Tone, a government-backed news website. “All the eyewitnesses – which include fishermen – felt certain that it was a baiji.”

Song told the Guardian the unconfirmed sighting occurred during a seven-day search mission down the Yangtze that began in the city of Anqing on 30 September.

At just after 9.20am on 4 October he recalled spotting a “white dot” emerge from the river. Soon after a “white light” appeared to puncture the surface of the water for a second time. Seconds later Song spotted what he believes was the baiji for the third and final time, swimming towards the river’s eastern bank.

The amateur conservationist, whose day job is as a publisher in Beijing, admitted he was not a baiji specialist and could not be totally sure the animal he had seen was the aquatic mammal. His group captured no images that might conclusively identify it.

But Song said local fisherman who had also seen the creature were “100% certain” it was the baiji.

With the apparent confirmation of its demise, the narrow-beaked river dolphin has become a symbol of the devastating environmental price China has paid for decades of unbridled development.

In the 1950s, the Yangtze is thought to have been home to thousands of such animals. But by the end of the 1980s that number had fallen to perhaps 200 thanks to a lethal cocktail of dam-building, over-fishing, pollution and boat traffic. By the turn of the century just 13 remained, according to one survey.

In his book about the baiji’s plight, Witness to Extinction, biologist Samuel Turvey described how thousands of years of human activity had decimated the Yangtze basin, a bio-diverse area once regarded as the Amazon of the East. As well as the baiji, the ecosystem was once home to two species of rhinoceros, elephants, gibbons and giant pandas. All have now disappeared.

During the Great Famine of the late 1950s, when tens of millions of Chinese people starved to death as a result of Mao Zedong’s rule, “the goddess of the Yangtze became lunch”, Turvey wrote.

More recently, shipping and catastrophic levels of industrial pollution have taken their toll. China’s official news agency, Xinhua, this week reported that more than 400,000 “chemical enterprises” were operating on the Yangtze’s middle and lower reaches – around half the country’s total.

Song said he hoped his team’s unconfirmed baiji sighting would prompt renewed efforts to save the species. He vowed to launch another expedition along the Yangtze early next year. “I want society to realise that the baiji is not extinct,” he said.

However, Turvey, a senior research fellow at the Zoological Society of London who took part in the unsuccessful 2006 search mission, said he was skeptical about the supposed sighting.