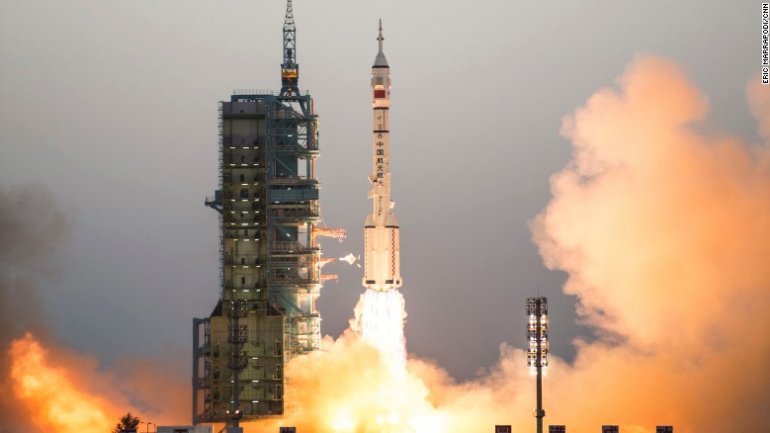 This is China's longest-ever crewed space mission. On board are two astronauts -- Jing Haipeng and Chen Dong. They will dock with the Tiangong-2 space lab, which was launched last month.
Jing and Chen will remain in space for a total of 33 days, with 30 of those spent conducting experiments related to medicine, physics and biology in the space lab.

Since October 2003, China has completed five manned space flight missions -- the last one took place in 2013 and lasted 15 days.

The Tiangong-2, and its predecessor Tiangong-1, are prototypes for China's ultimate goal -- a permanent 20-ton space station, which is expected to be sent into orbit in 2022.
China aims to send its space station into orbit two years before the International Space Station (ISS) retires in 2024, according to state news agency Xinhua.

The Tiangong-1, China's first space lab, is expected to fall into the Earth's atmosphere by late 2017. Some experts have speculated that China has lost control of the vessel.

"Based on our calculation and analysis, most parts of the space lab will burn up during falling," she said in a press conference last month, adding that it was unlikely to affect aviation activities or cause damage to the ground.damage to the ground.
Once the ISS goes out of service, China potentially will be the only country with a permanent space presence.
AFLĂ imediat Știrile Publika.MD. Intră pe Telegram