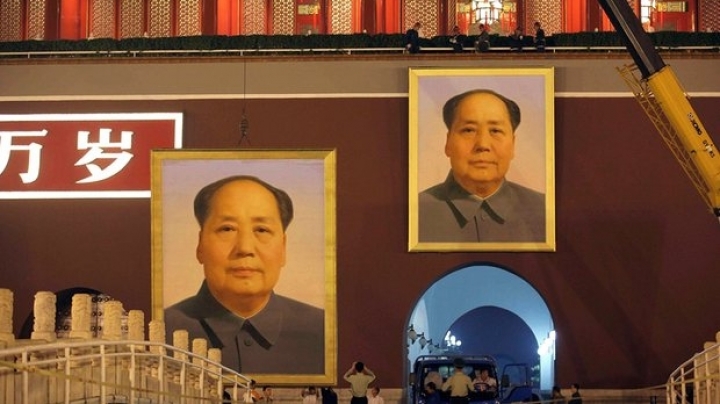 On Friday morning Zhang Hongliang, a 60-year-old academic, will jump out of bed and make his way to a secret rendezvous in north-western Beijing to sing a song about Mao Zedong, reports The Guardian.

Flanked by dozens of kindred Maoist spirits, the Chinese scholar will observe a minute’s silence before delivering a speech on the glories of the Great Helmsman’s 27-year-reign called: “Mao Zedong: the People’s Leader”.

Later that day, after hours spent pondering Mao’s teachings, the memorial meeting will conclude with a rendition of The Internationale.

“If we abandon Mao’s thoughts China will no have no future,” said Zhang, a professor at Beijing’s Minzu University and one of the country’s most outspoken neo-Maoists. “Without Chairman Mao there would be no new China.”

Zhang is not alone.

As the People’s Republic of China prepares to celebrate the 40th anniversary of its founder’s death, on 9 September 1976, similar memorials have been taking place across the country.

In Tangshan, an industrial hub that was levelled by an earthquake just over a month before Mao’s death, supporters marked the revolutionary’s passing with a two-day festival of poetry, shadow puppetry, calligraphy and storytelling.

A photograph published by the Huan Bohai News website showed participants huddled around a banner that read: “Chairman Mao is China’s Number One”.

And in Beijing newspapers have reported a spike in the number of Maoist pilgrims flocking to Tiananmen Square, where the Chairman’s embalmed body has been on display since a colossal mausoleum was opened there in 1977.

Once inside, mourners lay yellow chrysanthemums at the feet of a three-metre marble statue of the revolutionary leader, in a quasi-religious display of reverence.

“My journey won’t be complete until I see Chairman Mao,” one 56-year-old pilgrim, Huang Xin, told the Global Times as he queued to see the casket this week.

Shedding tears as he saw Mao’s rubbery cadaver up-close for the first time, Huang told the newspaper: “Our generation has a very deep attachment to Mao, who created a harmonious society in which people could trust each other with no tricks at all”.

Perhaps unsurprisingly in the country with the world’s largest online population -710 million at the last government count – cyberspace has also been marking the event. The Global Times said almost 2.5 million people had taken part in an “online flower-laying campaign” paying tribute to the Great Helmsman on the social networking app WeChat.

The commemorations sit uneasily with the widespread consensus among historians about the evils of Mao’s rule.

The economy was crippled and up to 45 million people are believed to have died in the Great Famine caused by Mao’s catastrophic Great Leap Forward push for breakneck industrialisation in the late 1950s.

Up to two million more lives are thought to have been lost in the tumultuous decade-long Cultural Revolution that began 50 years ago this year and officially ended with Mao’s death in 1976.

Even the Communist party itself has admitted that period of Mao’s rule inflicted “grave disorder, damage and retrogression” on the country.

Despite all this, Jeff Wasserstrom, a professor of Chinese history at the University of California, Irvine, said Mao remained a revered figure in some parts of China.