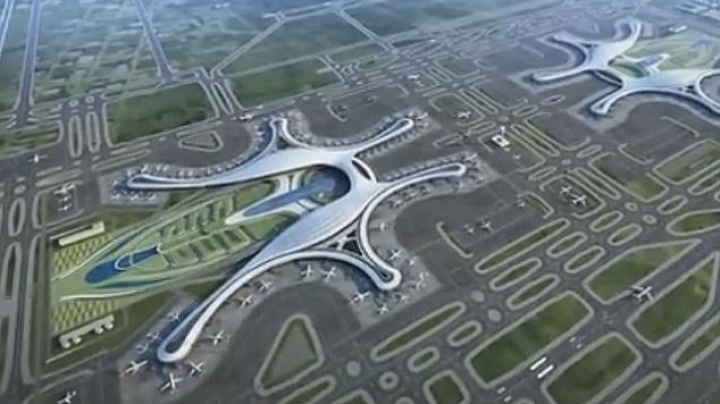 Most people visit Chengdu in south-west China's Sichuan province for its spicy food and pandas.

But the cosmopolitan city could soon be attracting visitors to its new 51billion Yuan ($7.6billion) mega-airport as a tourist spot in its own right, reports Daily Mail.

In fact, designers are already talking about the 5,200 hectare hub as a 'satellite town' that will handle up to 90million passengers a year and mean Chinese citizens won't have to leave the country to shop to their hearts' content.

As a new concept video reveals, the airport will be split into two main parts with the design inspired by the Golden Sun Bird, the symbol of Chengdu.

It will fully embrace technology and sustainability.

Personal locators, bio-recognition and rainwater recycling will all be incorporated into the design process according to China Daily.

The impressive airport, which broke ground in May this year, will not be fully complete until 2045.

An area within 3km radius of the new Tianfu Airport will become an airport city according to the Sichuan provincial government website.

As well as commercial possibilities for businesses, there will be hotels, restaurants, shopping centres, culture and entertainment facilities.

In the future, the airport itself could also become a satellite town - although its projected size will already make it one of the biggest airports in the world.

The developers were particularly keen to highlight the huge tax-free shopping area - over 2,000sqm (half an acre).

A spokesperson explained: 'The tax-free shop has been increased in size. Citizens are able to complete their shopping inside Chinese territory so when they leave China, they can just enjoy their holiday.'

The new Chengdu Tianfu Airport will be based in the nearby city of Jianyang, about 50 kilometers away from the centre of Chengdu.

It will be connected to major cities in the south west of China using high speed trains capable of travelling up to 350kmph.

A separate rail network will circle Chengdu and connect to the airport with trains capable of travelling up to 250kmph.

And despite the distance from the city, the ambitious developers are even thinking about planning an underground route, with fast and slow trains, that will connect the airport to central Chengdu.