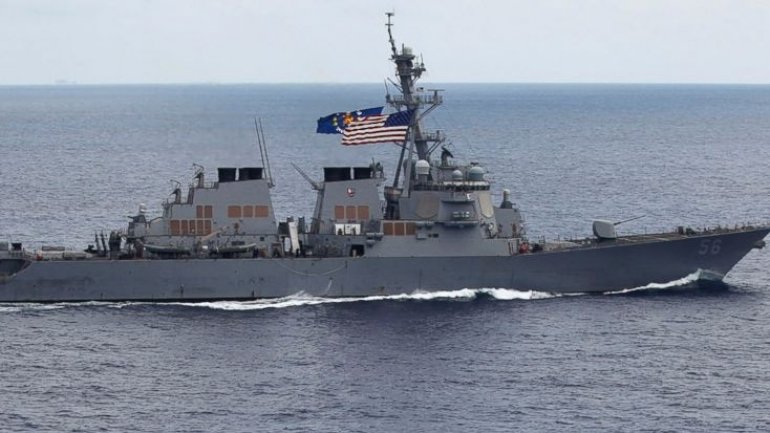 foto: In this photo taken Saturday, Aug. 13, 2011, the USS John S. McCain (DDG-56) destroyer sails off the coast of Vietnam. A Navy official says the USS John S. McCain has sailed close to a Chinese man-made island in a freedom of navigation operation in the di
AFLĂ imediat Știrile Publika.MD. Intră pe Telegram

China expressed its "strong dissatisfaction" with the U.S. over the Navy's latest freedom of navigation operation in which a warship sailed past one of China's man-made islands in the strategic South China Sea.

Foreign Ministry spokesman Geng Shuang said in a statement late Thursday that the U.S. move "severely undermines China's sovereignty and security, and severely endangers the safety of frontline personnel of both sides."

"China has the firm determination to safeguard its territorial sovereignty and maritime interests," Geng said. The U.S. move will "compel China to take measures to further raise its capacity to defend national territory," he said.

A U.S. Navy official told The Associated Press that the destroyer USS John S. McCain sailed past Mischief Reef on Thursday. U.S. officials say the military will continue to sail, fly and operate wherever permitted by international law.

Geng said the Chinese navy "identified the U.S. warship, warned and expelled it."

China and the U.S. maintain different interpretations on international law as applied to the operation of warships, and Beijing has ignored a Hague arbitration court's ruling that invalidated much of its South China Sea claim.

Tensions escalated after China began to build seven reefs, including Mischief, into islands, including three with runways, which the U.S. and China's neighbors fear could be used to project Beijing's military might and potentially obstruct freedom of navigation.

China has reportedly installed a missile defense system on the new islands, although Foreign Minister Wang Yi said Monday that China had "stopped or already completed land reclamation," on the islands two years ago.

Mischief Reef is also claimed by the Philippines, a U.S. defense treaty ally.

Although the Philippines has taken steps to improve ties with China under its current leader, Rodrigo Duterte, presidential spokesman Ernesto Abella said Friday "we don't find (the sail-by) objectionable."

Earlier, Wang said talks on a nonaggression pact aimed at preventing clashes from erupting in the South China Sea may start this year if "outside parties" don't cause a major disruption, in an apparent reference to Washington and allies such as Japan.

The U.S. is not a party to the disputes in the busy and potentially oil- and gas-rich waters that also involve Brunei, Malaysia, the Philippines, Taiwan and Vietnam. Washington, however, has declared it in its interest to ensure that the conflicts are resolved peacefully and that freedom of navigation and overflight remain unhampered. An estimated $5 trillion in annual trade passes through the waterway.