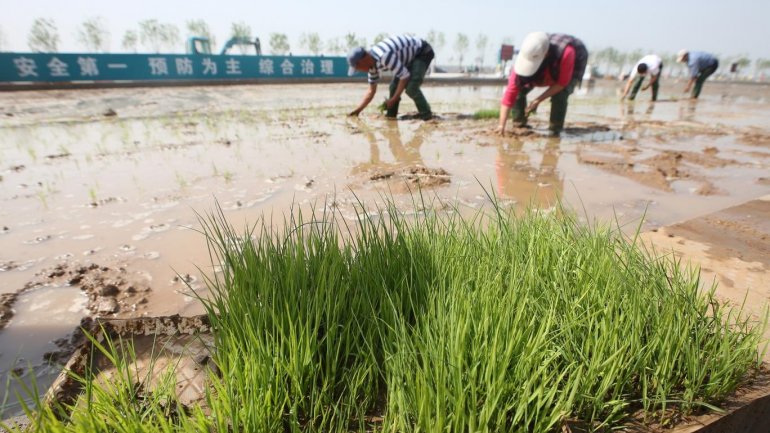 Scientists in China have developed several types of rice that can be grown in seawater, potentially creating enough food for 200 million people, wrote independent.co.uk

Researchers have been trying to grow the grain in salty water for decades but have only now developed varieties that could be commercially viable.

The rice was grown in a field near the Yellow Sea coastal city of Qingdao in China’s eastern Shandong province. 200 different types of the grain were planted to investigate which would grow best in salty conditions.

Sea water was pumped into the fields, diluted and then channelled into the rice paddies.

The scientists expected to produce 4.5 tonnes of rice per hectare but the crops exceeded expectations, in one case delivering up to 9.3 tonnes per hectare.

"The test results greatly exceeded our expectations," Liu Shiping, a professor of agriculture at Yangzhou University who is involved in the project, told Xinhua.

There are one million square kilometers of land in China where crops do not grow because of high salinity. Scientists hope the development of the new rice will allow some of these areas to be used for agriculture.

If even a tenth of these areas were planted with rice, they could produce 50 million tonnes of food – enough to feed 200 million people and boost China’s rice production by 20 per cent.

The new type of rice was developed by a team led by 87-year-old Yuan Longping, who has spent decades trying to breed rice to grow in different conditions. The Chinese government has been investigating how to grow rice in salty waters since the 1970s.

Mr Yuan said: "If a farmer tries to grow some types of saline-tolerant rice now, they most likely will get 1,500 kilograms per hectare. That is just not profitable and not even worth the effort.

"Farmers will have an incentive to grow the rice if we can double the yield.”

The saltwater rice is currently on sale for around 50 yuan (£6) per kilogram – around eight times more than ordinary rice. Despite the cost, six tons of the grain have already been sold, with consumers praising its flavor and texture.

The rice is also thought to have several health benefits, including being high in calcium.