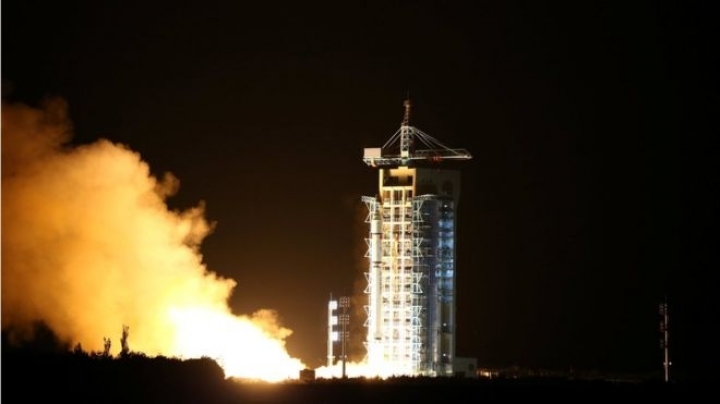 It was carried on a rocket which blasted off from the Jiuquan Satellite Launch Centre in China's north west early on Tuesday.

The satellite is named after the ancient Chinese scientist and philosopher Micius.

The project tests a technology that could one day offer digital communication that is "hack-proof".

But even if it succeeds, it is a long way off that goal, and there is some mind-bending physics to get past first.

The satellite will create pairs of so-called entangled photons - tiny sub-atomic particles of light whose properties are dependent on each other - beaming one half of each pair down to base stations in China and Austria.

This special kind of laser has several curious properties, one of which is known as "the observer effect" - its quantum state cannot be observed without changing it.

So, if the satellite were to encode an encryption key in that quantum state, any interception would be obvious. It would also change the key, making it useless.

If it works, it will solve the central problem of encrypted communications - how to distribute keys without interception - promising hack-proof communications. The encrypted message itself can be transmitted normally after the key exchange.