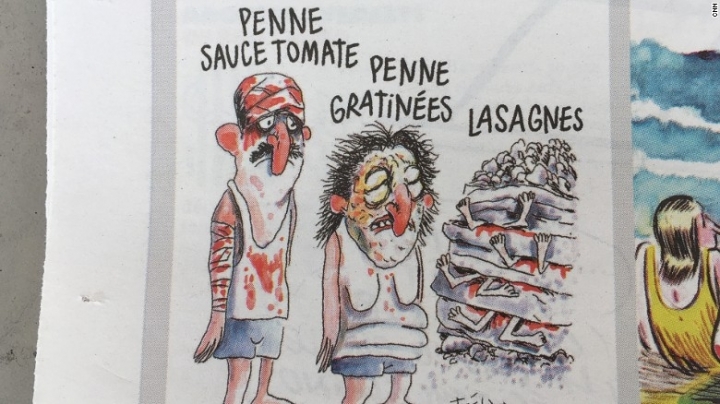 The latest edition of the edgy French publication features a cartoon entitled "Earthquake, Italian-style," which depicts victims of the 6.2-magnitude quake with varying degrees of injury, each likened to an Italian recipe.

A severely bleeding man is labelled "penne with tomato sauce." A woman with a badly bruised or burned face is "penne au gratin." And a pile of victims pancaked beneath a collapsed building, their legs sticking out from the bloodied rubble, is "lasagna."

Sergio Pirozzi, the mayor of devastated Amatrice -- a town whose reputation for its renowned all'amatriciana pasta sauce recipe was referenced in the cartoon -- labeled it an "unpleasant and embarrassing satire."

"I'm sure it doesn't correspond to the real sentiment of the French people," he said, according to Italian national news agency ANSA.

"Irony is always welcome, but you can't satirize disasters and the dead," he said. "We will show the Italian people are a great people, during the emergency as during the reconstruction."

More than 180 people were killed in Amatrice, and much of the town leveled.

The hashtag #CharlieHebdo was soon trending on Twitter, with many expressing disgust at the cartoon for ridiculing the victims of the quake, which killed nearly 300 people and left many villages in ruins.

The cult weekly magazine was thrust into the global spotlight in January 2015, when two Islamist gunmen, angered by the magazine's satirical approach to Islam, attacked its Paris office, killing 12.