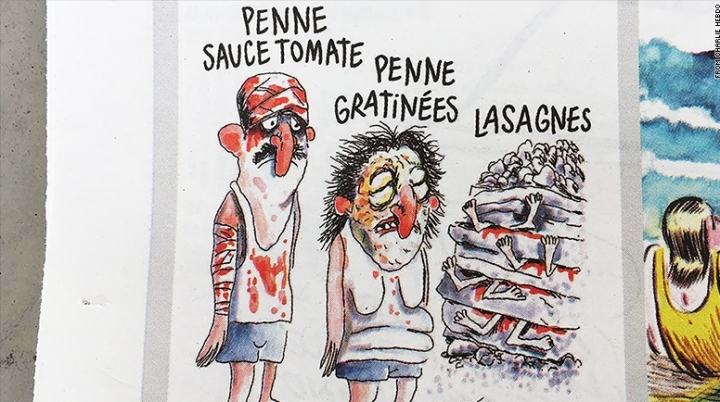 Charlie Hebdo may be about to find out after officials of an Italian town said they wanted prosecutors to take action against the French magazine for depicting earthquake victims as pasta dishes, and appearing to blame the mafia for the death toll.

An earthquake last month killed at least 290 people, most of whom lived in Amatrice -- home to the famous amatriciana pasta sauce.

Amatrice town council filed a petition for "aggravated defamation" with a local prosecutor on Monday, its lawyer Mario Cicchetti told CNN. The prosecutor will consider the claim before deciding whether to pursue the magazine.

The complaint centers on two cartoons Charlie Hebdo published after the quake.

The first, headlined "Earthquake, Italian-style," showed victims with varying degrees of injury, each likened to an Italian recipe.

It sparked outrage in Italy, and prompted the French embassy in Rome to issue a statement distancing itself from the publication.

The second stated: "Italians... it's not Charlie Hebdo that builds your homes, it's the mafia!"