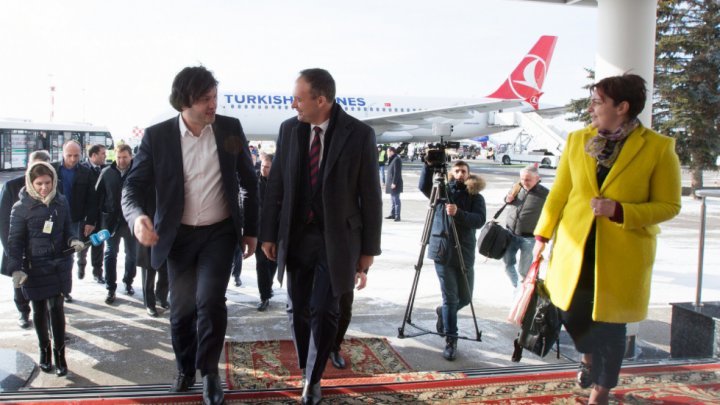 President of Moldovan Parliament, Andrian Candu, has met at the airport Chairperson of the Parliament of Georgia, Irakli Kobakhidze. The delegation from Georgia will participate at the inter-parliamentarian summit "Georgia, Moldova and Ukraine: Eastern Partnership and current security challenges".

Andrian Candu welcomed the guests and expressed his gratitude for organizing together this important event on regional security issues.

The summit is organized in partnership with the Atlantic Council at the initiative of the Parliament Presidents of Moldova, Georgia and Ukraine and will debate on security of information, energy, defense and talk on economic sustainable development. At the event will gather close to 150 officials and renown specialists, including Presidents of Parliaments, Members of the European Parliament and representatives of United States Congress, as well as well known local and international experts.

The three Presidents of Parliaments will join their efforts to promote a common defense and security policy.

Members of the European Parliament and representatives of United States Congress have also confirmed their attendance at the summit held in Chisinau. As well as experts, such as executive vice president at the Atlantic Council of the United States, Damon Wilson, former United States Assistant Secretary of State for Democracy, Human Rights, and Labor, David Kramer,  Chairman of the International Advisory Council at the Center for Social and Economic Research, Anders Åslund, Coordinator for the Office of Reconstruction and Stabilization, John Herbst, Ambassador Asif Chaudhry, Associate Director, Strategic Research Partnerships, and International Directo, Jonathan Eyal, Ambassador Alexander Vershbow, former Deputy Secretary-General of NATO, as well as other international and regional experts.