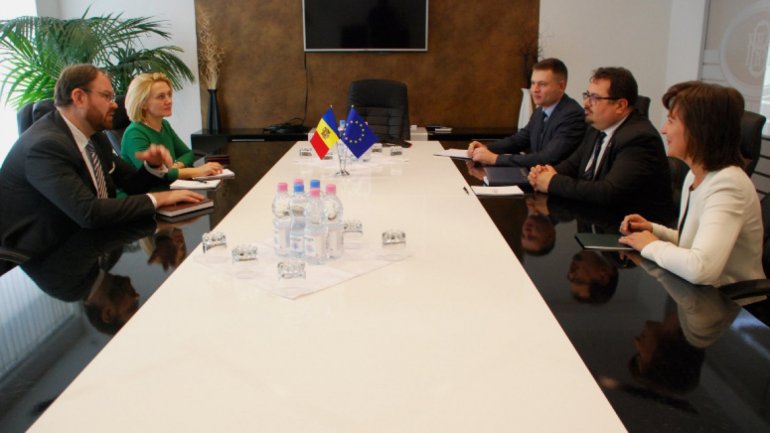 National Bank of Moldova's leaders have met with the chief of European Union delegation in Republic of Moldova, Peter Michalko. During the meeting, the two have discussed of the banking system reforms and the actions that must be taken for the EU Association Agreement.

The Central Bank's chief has expressed his gratitude for Europe's support in the successful implementation of the Twinning project and the new project for financial- banking assistance. In this context, the National Bank of Moldova's governor Sergiu Cioclea greatly appreciated the assistant the European Counselor, Aldona Jociene showed for Moldova's Central Bank when it came to banking regulation and surveillance.

In his turn, Peter Michalko has confirmed that European Union will continue to support the National Bank with reform implementation and mentioned the importance of realizing all term authorities took upon themselves for the IMF program and EU to regain credibility in the National Bank of Moldova after the crisis.

Peter Michalko accentuated the importance of investigating frauds in the banking sector. The European Official has appreciated our country's progress for the creation of modern regulations for supervision, in accordance with EU standards and insisted the necessity to fortify the independence the supervision capabilities of the Central Bank to ensure financial stability and transparency in the  financial-banking field to satisfy citizen's interest.

It is Peter Michalko's second visit to the National Bank of Moldova. on October 20 2017, Central Bank has hosted a common meeting with the chief of diplomatic mission from EU in Republic of Moldova, attended by Minister of Finance  Octavian Armașu. The event took place after IMF and World Bank's annual meeting and official have discussed of the macro-financial development and the banking domain.