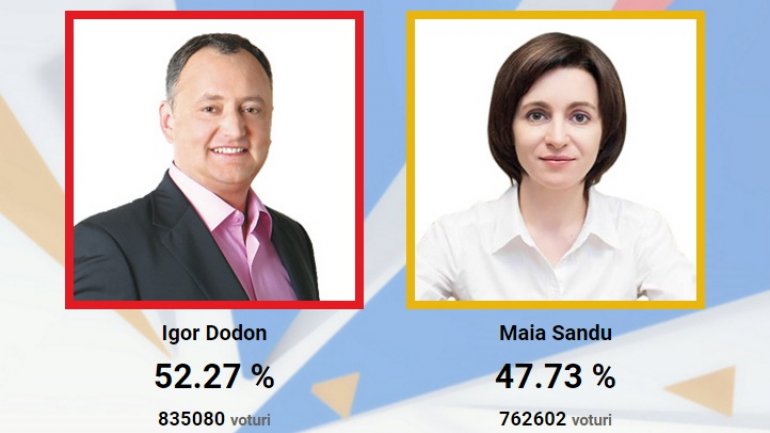 Central Election Commission presented the preliminary results of the presidential elections. According to the data, at 7:00 were closed the last polling stations on the territory of the United States. Central Election Commission announces that until 10:00 were processed 99.9% of the minutes. There are 2 more processes to be analyzed: from Sacramento and one city from the French Republic.

The presence to voting in the runoff is over 53% of electors who cast their votes.

According to CEC, the biggest rate of participation to the vote was registered in Chisinau municipality, more than 58%, the lowest one being registered in Cantemir district (41%).

Most active electors were the ones aged between 26 and 40 years.

Until now were processed 99.95% of the minutes. Thus, Igor Dodon accumulated  52.27% of the votes. His opponent, PAS candidate Maia Sandu obtained 47.73% of the votes. The Electoral Code foresees that the candidate who obtained the biggest number of votes in the runoff is declared as chosen.

Central Election Commission mentions that these information bear a preliminary character, until the electoral documents in original form will be presented to CEC. The district electoral councils have 48 hours after the closing of polling stations in order to present the minutes on the total of results of elections on district.

At the same time, according to the conditions of the Electoral Code, Central Election Commission has 5 days in order to make the minutes of elections totalization, afterwards, in a period of 3 days since the signing of the minutes, will present to the Constitutional Court a report on the results of the presidential election.