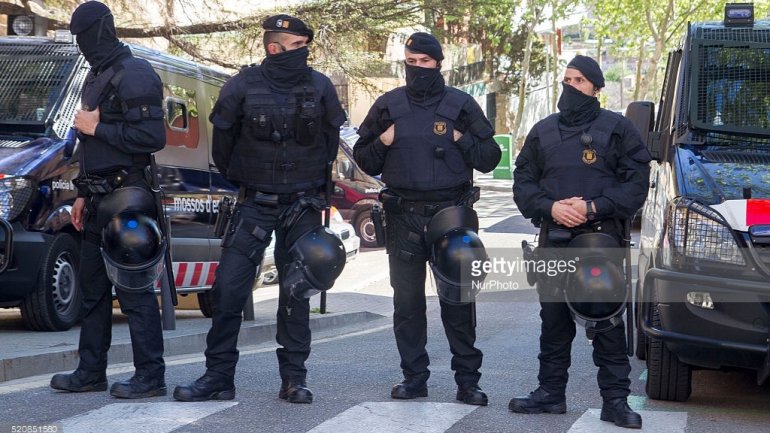 For the past weeks, tensions concerning Catalonia’s independence referendum have been under the spotlight, wrote euronews.com

Images of clashes during the day of the referendum have made headlines across the globe, as well as the many political speeches that followed.

But the conflict has also greatly impacted many unheard voices.

Officers from Catalan regional police service Mossos d’Esquadra have been provoked by the excessive politicising of many working in this force. This has been aggravated after different stands within the force were taken during the October 1 referendum.

Euronews has spoken with a Mossos officer who pointed out that the only solution is for officers to fall under a one central command at a national level.

“I think it would be best for us, for our legal and professional security. We want nothing more than to serve all citizens, and not just a section, as we have been told so far, although the orders have been unclear.

“For us, the best thing would be to be able to depend on a clear command with clear instructions so that everyone knows what to do.

“Yes we are very concerned about the absence of clear orders from our superiors and the way they are communicated to the officers. It’s a situation that creates insecurity amongst us.”

The officer, whose identity has been withheld for reasons of safety, has criticized some of his colleagues’ impartial attitude during the referendum, arguing that their function should be to serve all Spanish citizens.

“Not everything has been revealed. Only the images of so-called comrades. I do not know if I consider them comrades. We saw how they tried to help the population. They did as little as possible to make them close the polling stations.

“Generally, we tend to have very good relations betwen the local police, Mossos, Guardia Civil. We all have the same function in the national territory, that is, our work is the same: serving the citizens. Relationships are great, apart from the occasional issue.”

The officer argues against politicization of the Mossos which has been increasingly inflicted on members of the force during this time of crisis.

“The Mossos has always faced the future in a positive way, because there is a spirit of service. We continue to serve the entire population of Catalonia and Spain. The fact that they wanted to make us a police service just for the pro-independent citizens, and the rest of the people have their own police too.

“What is important is to depoliticize this police force so it serves all citizens.”

Mossos spokesman Inspector Albert Oliva denied the allegations and pointed out that officers have an internal mechanism to resolve issues.

“In order to criticize or praise police performance, it is necessary to have all the elements on the table. We can not give opinions based solely on personal positions. In any case, there are internal mechanisms within our organization that exist so that officers can express their opinions or criticisms, if any, through the chain of command.”

The action of the Catalan police was strongly criticized by the national police and relations between the two police services have deteriorated.

“The Mossos did not fulfill their mandate as police,” Ramón Cosío, a police union spokesman told Euronews. “There has never been an identical situation in a Western country: a police force that does not obey the orders of a judge or that disobeys the instructions of the interior ministry.

“The police do not work for any political party, or political interests, or any ideology. We are here to work for public safety, that is our function. When the Mossos d’Esquadra return to this role, with which society counts, the tension will be lowered.”