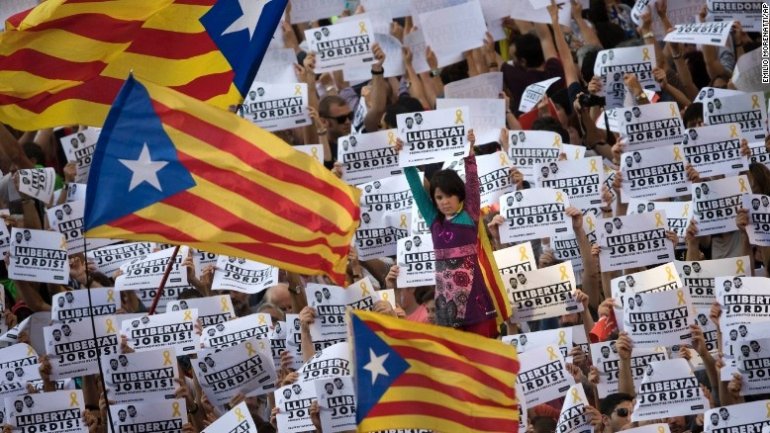 Catalan leaders have insisted they will reject any attempt by Madrid to impose direct rule on their autonomous region, as a political crisis escalates over Catalonia's threats to declare independence from Spain.

On Saturday, Spanish Prime Minister Mariano Rajoy announced his plans to dissolve the Catalan parliament under a never-before-used article of the Constitution, vowing to remove the region's elected leaders as soon as possible and hold new elections.
It is the most serious threat Rajoy has made since Catalonia held an independence referendum on October 1, triggering Spain's worst political crisis in decades.
Madrid dismissed the vote as illegal but Catalan leaders saw it as a mandate to announce a split from the country.
On Saturday, nearly half a million people protested in Barcelona, Catalonia's biggest city.
Demonstrators shouted "Freedom! Freedom! Freedom!" and "Rajoy, Rajoy, so you know we are leaving!"
Catalan President Carles Puigdemont was among the throngs, but he stopped short of declaring independence, as he had threatened to do earlier in the week.
"The Catalan institutions and the people of Catalonia cannot accept this attack," he said later in a televised statement, accusing Madrid of seeking the "humiliation" of the Catalan people.
"What is being done with Catalonia is directly an attack on democracy that opens the door to other abuses of the same kind anywhere, not just in Catalonia."
Other Catalan politicians were similarly defiant. Catalan parliamentary leader Carme Forcadell accused Rajoy of "enormous political irresponsibility" that "trespassed all limits."
"He announced a de facto coup d'etat with which he aims to take over Catalan institutions," Forcadell said Saturday.
"We will not take a step back. We were chosen by the people of this country as legitimate representatives, and as public servants we owe ourselves to them."
Rajoy is seeking to employ Article 155 of the constitution, which would allow the national government to suspend the autonomy of the Catalan regional administration. Rajoy said the measure would be sent to the Spanish Senate within the week.
New elections should be called for Catalonia within six months, Rajoy said, adding that he wants it to happen as soon as possible.
Under the measures proposed Saturday by Rajoy, Puigdemont, his vice president and ministers would be suspended and replaced by the administration in Madrid, where necessary.
"The government had to enforce Article 155. It wasn't our desire, nor our intention. It never was," Rajoy said. "But in this situation, no government of any democratic country can accept that the law is ignored."
In undertaking these steps, the government has four goals, Rajoy said -- to return to legality; to restore normality and coexistence in Catalonia; to continue the region's economic recovery; and to hold elections under normal conditions.
Catalan media reacted Sunday to Rajoy's announcement with editorials goading Puigdemont to declare independence soon.
Every move Madrid has made to ward off an independence declaration, the Catalan people appear to have responded to with more vigor.
Madrid sent thousands of police into Catalonia to stop the October 1 vote, but officers were seen using what many called excessive force, shooting rubber bullets at protesters, dragging voters from polling stations by their hair and restraining elderly people.
Even though members of the Spanish government eventually apologized for the police's force that day, Dastis defended the police Sunday, saying that the use of force was "limited" and "provoked," and that many of the images had been doctored and constituted "fake news."
Read more at CNN
AFLĂ imediat Știrile Publika.MD. Intră pe Telegram