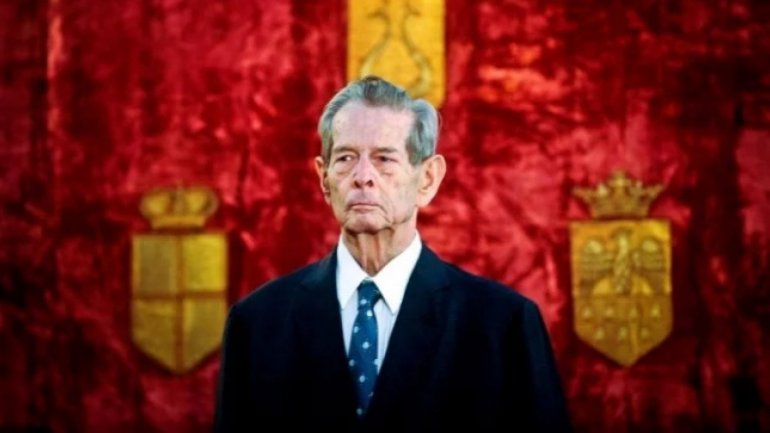 The lifeless body of His Majesty late King Michael I arrived in Romania. He was transported from Switzerland where the late King passed away, using a military aircraft of the Defense Ministry. Some members of the Royal Family, were in the plane all the way from Geneva to Bucharest, acting as guards.

At Otopeni Airport, the casket was met by Her Majesty Margareta, Crown Princess of Romania, members of the Royal Family, of the Government, of the Parliament, of the Army and of the Orthodox Church from Romania.
The casket of the late King will be transported by car to Peleș Castle, where he will remain for a few hours. There, officials from all over the world are awaited, including representatives from Republic of Moldova. Also today, King Michael I will be taken to the Throne room of the Royal Palace from Bucharest, where he will remain till Saturday, when His Majesty will be buried. On 16th December, the lifeless body of the late King will be taken by the Royal Train from Romania's Capital to Curtea de Argeş, where in the evening, the funeral services will take place and the King will be laid to eternal rest. King Michael I of Romania passed on Wednesday in his residence from Switzerland. Last year, the monarch has stopped appearing in public, after his health worsened. The late King suffered from leukemia and passed away at 96.

Today, at 11:00 local time, the lifeless body of His Majesty late King Michael I will arrive at Otopeni Airport, from where he will be transported by car to Peleș Castle. The event will take place under the watchful eyes of the Head of Royal Family, Crown Princess of Romania, Margareta, as well as member of the Royal Family, representatives from State institutions, Orthodox church and His Majesty's house. The press will be allowed to attend the ceremony, but it will be closed to the public.

On Wednesday, 13th December 2017, at 14:00 local time, the lifeless body of the late King will be laid in the Peles Castle's Hall of Honor. The Crown Princess and the Royal Family will be present at Sinaia. The program, by which officials will be able to bring their condolences at Peleș Castle is the following:

Access to Peleș Castle is only granted based on existing list previously mentioned in the Royal Protocol for the institutions mentioned above.

The public will not have access during the stay of the coffin at the Royal Domain of Sinaia. The press will be able to access the terrace of the Peleș Castle and, at certain hours, in the Hall of Honors.

On Wednesday, 13th December 2017, at 18:00 local time, the lifeless body of His Majesty will be taken from Peleș Castle and transported to the Throne room from the Royal Palace (Calea Victoriei, No. 49-53), where he will arrive at 20:30 local time. The ceremony will be private. The press and public will not be allowed entrance in the Throne Room during the ceremony. The press will only be allowed to enter the Royal Palace.

All those who wish to come and lay flowers, as well as bow to the catafalque of His Majesty, will be able to come to the Throne room of the Royal Palace on:

The entry is free. The press is allowed in.

Those present at the Royal Palace who will come to say their last farewells for late King Michael I are requested to follow the rules:

During the period of free entrance in the Royal Palace a First-aid post will function.