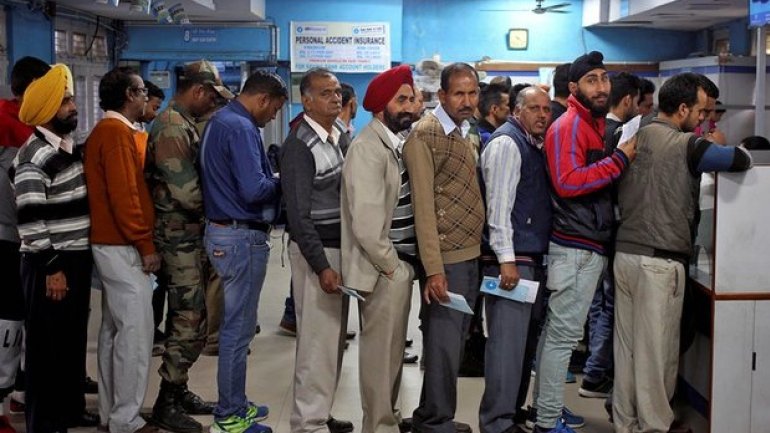 Outside the Churchgate branch of the Bank of India in south Mumbai, some of those queuing for cash have become familiar faces, reports The Guardian.

Ever since the prime minister, Narendra Modi, unexpectedly withdrew high-value 500- and 1,000-rupee banknotes from circulation, wiping out 86% of India’s currency overnight, queuing for cash has become a national sport. But for some, such as Santosh Garg, who comes here every day on behalf of his bosses at an insurance company, lining up has become a part of his job description.

"Obviously I don’t like coming and standing in line for two hours in the sun," Garg says. "I do it because my boss tells me to. It’s not like I can say no."

Modi’s money crunch has prompted an unexpected boom in the queue-sitting business, where people are paid to stand in line. Some people send their employees to hold their place, while others hire workers paid by the day to do the job. Tech startups such as BookMyChotu and DoneThing have also swooped in to capitalize on the queuing crisis, offering "helpers" who will hold your place in a bank queue for 90-150 rupees (£1-£1.75) an hour. The proxies wait until they are close to the head of the queue then call their temporary employer, who makes the transaction.

But the cash-for-queuing business is controversial. Some of those who have waited for two hours outside the bank near Churchgate argue that sending someone to hold your place in a queue is unethical and unfair to those who have no choice but to come themselves.

Some of India’s elite, such as the film star Ravi Babu, who queued for 15 minutes at a cash machine in Hyderabad holding a live piglet, have joined the crowds themselves. But most of the better-off have left the queuing to others.

Queuing for pay is not a new concept in India, nor in other parts of the world. In New York, a place in a queue for a free public theater performance can come for $125. In top Beijing hospitals, coveted doctor’s appointments, which can be subject to months-long waiting lists, can be bought from line-standers. Free-market economic theory suggests that there is nothing wrong with paying to take someone’s place in a queue if both parties agree.

But with the note shortage in India, cash is precious and the queue-jumping jugaad has a dark side. As banks quickly run out of cash, many have to go hungry if they cannot make it to the front of the line. Others have to take days off work to wait in line. One man, standing in the queue at the bank, who does odd jobs for a launderette, says he will phone his boss when he reaches the front, so that he can come and make a cash deposit. “Every man, whether he’s rich or poor, has a mouth to feed. But somehow, only ordinary folks like us end up standing in line,” he says.