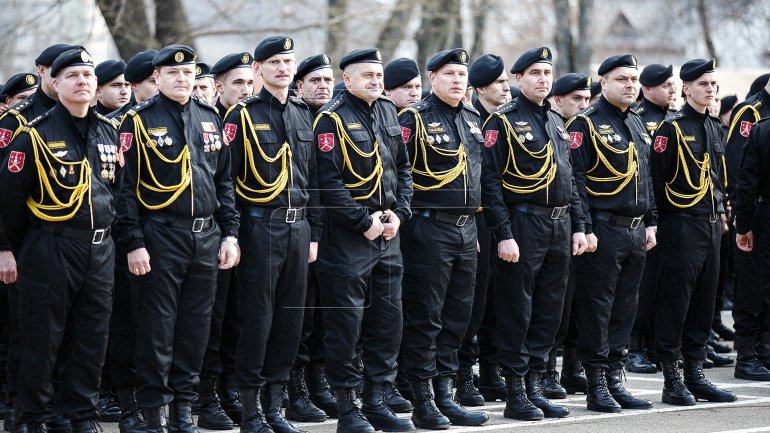 On December 12th, the festive event dedicated to the 25th anniversary of the founding of the MAI Carabiniers troops was held. The event was attended by the Ministry of Internal Affairs, representatives of diplomatic missions, leadership of Carabiniers Department (DTC), delegation of Italian Carabinieri, war veterans, MIA subdivisions leaders and other guests.

Accompanied by Internal Affairs Minister, Alexandru Jizdan addressed a message of congratulations and support for the entire Carabineers Department (DTC), noting changes that occurred in these years and the important role of this subdivision of the Ministry.

"On behalf of my staff and the entire flock Interior Ministry wish you a prosperous future health, optimism and good judgment in everything you do. You are the future, are those who assume with dignity and courage military oath. We will support and DTC initiatives still in development u institution by upgrading them through provision of necessary technical and investing in training soldiers who chose to do noble service, "said Interior Minister Alexander Jizdan.

The Deputy Minister of Internal Affairs, Commander of the Carabinieri Corps, Ion Turcanu said words of gratitude and thanksgiving to veterans Carabinieri that are daily working under the DTC.

"We most sincere and heartfelt congratulations accompanied by gratitude for the work selflessly fully successful achievement of the objectives and tasks entrusted. I express my gratitude to veterans Carabineri for diligence submitted to forming the foundation of organization and education of generations of soldiers indeed" , said Deputy Minister of Internal Affairs, Ion Turcan.

On the occasion of the anniversary, for devotion and resulting activity DTC soldiers were mentioned with honors, distinctions and special ranks MIA and DTC.

After the official part of the ceremony, the Carabinieri special purpose subdivision of DTC executed some demonstrative exercises and Orchestra - Model presented a defile-show jointly with the military platoon Commandatura independent of the military unit in 1002.

Carabinieri troops were formed on December 12th, 1991 and is the main institution specializing in defense and diplomatic objectives, participating in public order management. Over 2,000 troops are incorporated today in the the Department of Carabineri.