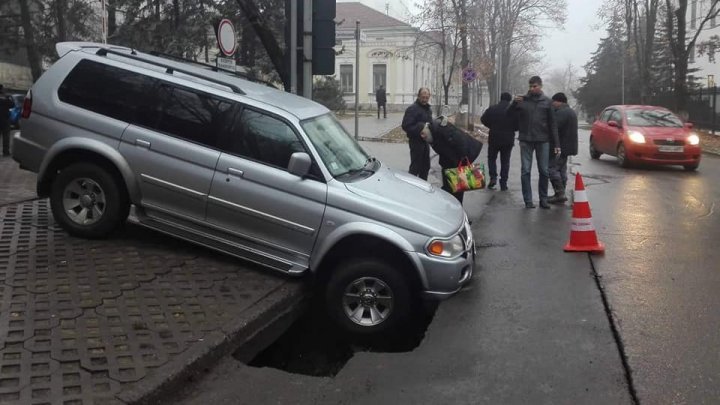 A car fell into a hole after a driver wanted to park. The incident occurred this morning behind the building of the Parliament. It is unknown if the owner of the car is a Parliament employee.

According to Apa-Canal press officer, this road portion was closed, because the sewerage is repaired here.

The incident took place at the intersection between Anatol Corobceanu and Sfatul Tarii streets. In the footage you could see that the hole is one meter deep.

After the car has been taken off the hole, the driver left. The man refused to comment on this situation. Certainly, he will ask the company that repairs the sewerage to cover the damages he got.

According to Apa-Canal press service, the road portion was closed.

"A foreign company works there. They are repairing the sewerage", said Nadejda Fotescu, press officer of Apa-Canal.

The police is at the place of the incident.

"We will establish all the circumstances of the case", said Cristina Sevciuc, police inspector.

Works carried out for months and uncompleted on Alecu Russo

Hoist a flag! PUBLIKA campaign to honor love towards our motherland