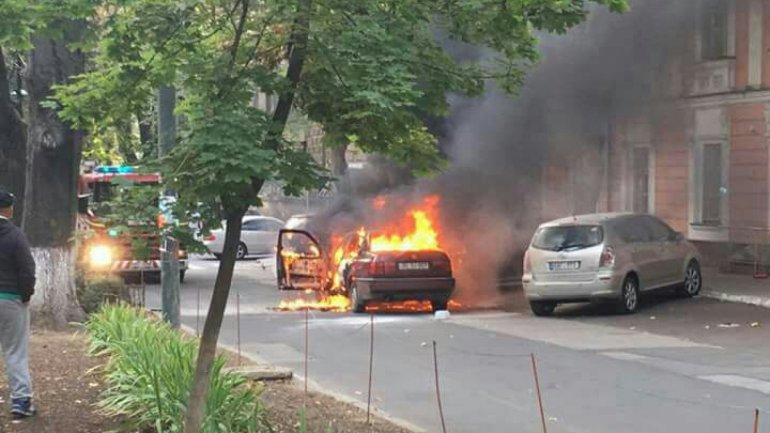 A driver from the capital has woken up to his car engulfed in flames at the intersection of Serghei Lazo and 31 August Streets, the fire having destroyed the vehicle.

The driver, who came out without a scratch, has declared that the car, worth 3 000 euro, has passed the inspection two weeks before, but now is damaged beyond repair.

"I was driving, when suddenly smoke starting coming out of the wheel. I tried to use a fire extinguisher, but to no avail", car owner  Alexandru Samson stated.

The flames has also damaged two cars parked nearby.

"Of course coming and seeing such thing is unpleasant. All the plastic parts and windows got melted, there even smoke in the car, thankfully there was no explosion" one of the nearby-cars owner, Serghei Cucereavîi said.

"The vehicle was parked legally, what is to be done is such situation? I am concerned now that the insurance company will simply shrug", another nearby-car owner Victor Negru confessed.

Firefighters sent to the sight have managed to extinguish the flames in less than 10 minutes.

"The damages are not our fault, as we went immediately after the call was made. The car had a short circuit while being in movement and burned down completely" firefighter Ruslan Lungu announced.

"While being dispatched to the sight, we gained the information that it was a Volkswagen car that was burning, an inspection will show why the short circuit happened" patrol officer Valeriu Munteanu proclaimed.

Firefighter have yet to establish what caused the flames.