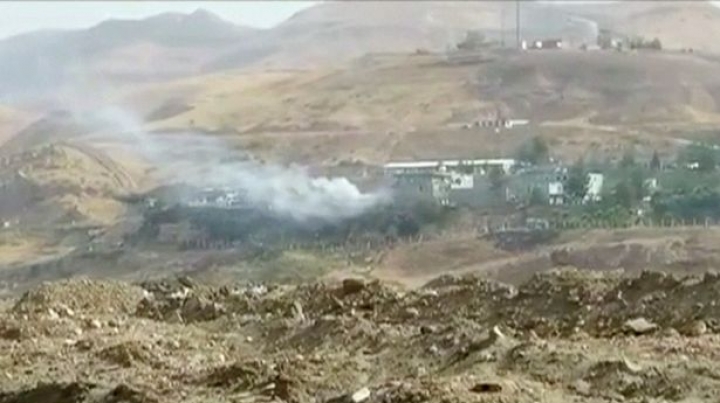 The huge explosion at 07:00 targeted a checkpoint, and left the nearby riot police HQ in ruins.

Prime Minister Binali Yildirim blamed the banned Kurdistan Workers Party, PKK, and vowed to give the "vile attackers the answer they deserve".

Cizre has been the subject of several curfews in the past few months by Turkish authorities fighting the PKK.

The UN and human rights organisations have demanded an investigation into allegations that more than 100 people were burned to death while sheltering in basements in Cizre - a poor town close to the Syrian border.

The Turkish government has rejected allegations that it targeted civilians.

A string of PKK attacks have targeted Turkish security forces since a two-year ceasefire collapsed in July 2015.

Since then, military operations in the south-east and retaliatory attacks by the PKK have left hundreds of people dead.

Turkey's PKK conflict shows no sign of abating, says the BBC's Mark Lowen, and the government has ruled out any negotiations until the group completely disarms.

The latest violence comes as the army reels from a huge purge following a coup attempt in July.

As well as fighting the PKK, Turkey is battling so-called Islamic State, whose militants have carried out a series of bloody attacks over the past year.

The PKK, which is banned in Turkey, launched its insurgency in 1984, alleging widespread abuse and discrimination against Kurds by Turkish authorities.