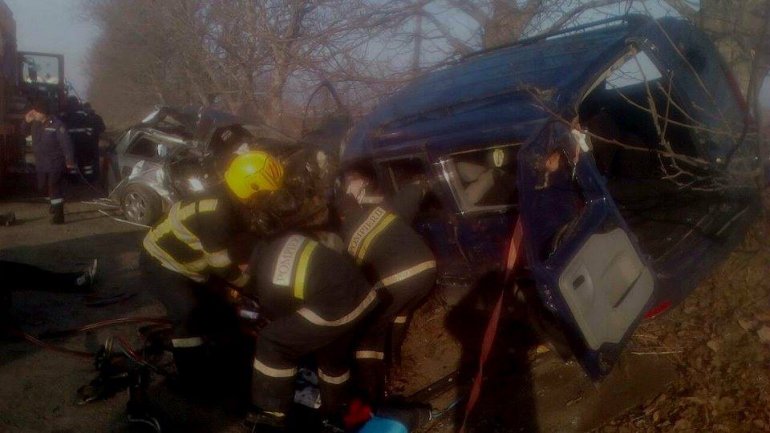 (Update 15:10) Among the five people who passed away this morning, on the Chișinău-Anenii Noi road, near Todirești village, turned out to be a 22-year-old man and his daughter of 16-months-old. The child's mother, 24, is currently in critical condition at the Municipal Clinical Emergency Hospital. The other three deceased were men of 33, 38 and 64 years old. At the moment, the survivors, women of 24 and 23 years old are both in critical condition. Police is investigating the accident.

(Update 14:04)A car accident from this morning claimed the life of five people, including a minor of 1 year and 4 months old and injured another two persons, of 24 and 23 years old near Todireşti village, Anenii Noi district. The survivors are in critical state.

"Two persons were taken from the accidents and immediately transported to the ER of the Emergency Hospital. Both patients are conscious, but in critical condition" attending physician of the emergency department, Igor Curov said.

According to the police, an Audi car with four passengers was going toward Chişinău. The driver failed to pass another car: having begun to drive against the traffic and collided with a Dacia car. The impact resulted in two passengers of the Audi car passing away on site and another two gravely injured. All three passengers of the Dacia car, including the child, have not made it.

"The eyewitness who saw the accident and was questions claims that the Audi, registered in Transnistria was speeding and when attempting to pass another car, went on the other lane and hit the Dacia vehicle" chief of Anenii Noi Police Inspectorate Valeriu Codreanu explained.

Multiple rescue teams were dispatched to evacuate the area.

"Three teams of firefighters and rescuers were dispatched on site to free the area. They performed the works and afterward transported the victims to the proper services" chief of Anenii Noi department for Emergency Situations declared.

General Inspectorate for Emergency Situations has launched a hotline 901, following the car accident.