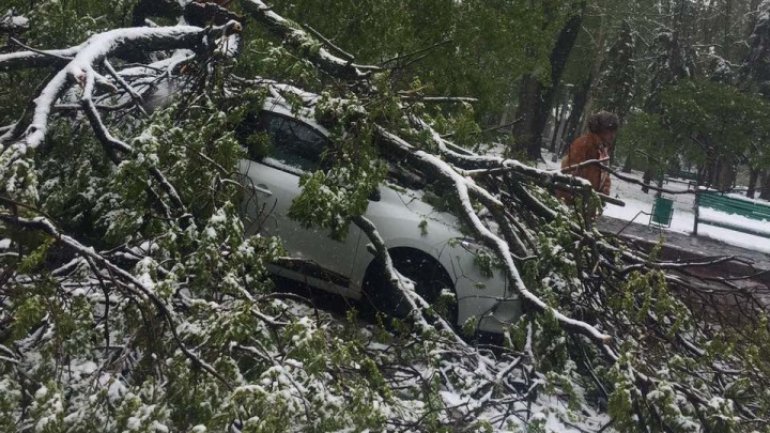 In the last hours the Capital was paralyzed by abundant snow. Under the snow’s hundreds of trees and fell to the ground and tens of cars were seriously damaged. At least 450 workers from the Capital City Hall work without break.

Botanica, Buiucani and Center are the most affected sectors, where 300 trees and big branches fell,  and the situation aggravates from hour to hour.

Three cars were destroyed after a tree fell to the ground in the yard of a block on street Doina and Ion Aldea Teodorovici.

"It’s danger here, not long ago has again fallen a branch. - Cade una după alta? - Yes. One after another and I want to take it elsewhere”.

Some drivers tried to get their cars from under the branches on their own, because they were late for work.

"The neighbor phoned me and told me that the cars are damaged. The windscreen is broken from the front, there are expenses".

The pedestrians are also affected, they’re so scared that they don’t know on which side to walk so that the branches don’t fall over them.

"There has passed a woman with a child. It was about to fall on her head. Me myself am afraid to stay here”.

"The trees are now with leaves, they have their weight and the snow falls. Right in front of where I live are 16 floors.

There were formed traffic jams, even though many left their cars at home.

"We exited for work, but sit in traffic jam. – Will you be late or not?- I think so. –For how much? – I’ve been late with half an hour already".

"It’s very hard, other drivers exceed, there are traffic jams, here also. The trucks sit on the margin, the roads are uncleaned”.

The employees can barely face the high number of requests because the phone of the of “Green Spaces” from the Capital is phoned continuously.

There will be some very hard days for the workers from “Green Spaces”. Because of the too high number of trees on the sidewalks, but also in the blocks’ yards, the workers will have to work non stop.

There was circulated with difficulty on the national roads. On route Chişinău-Orhei, for example, several cars were blocked because of the impracticable road.

"There has remained the last hill and I didn’t go up. I’m going to Orhei. No one else has expected such a weather. We can’t go up the hill. The cars have stopped in the front and we can’t go no longer".

There were thrown on the roads 200 tons of anti-slipping material, in total there have been set for work 22 car specs, and till the news’ broadcasting.