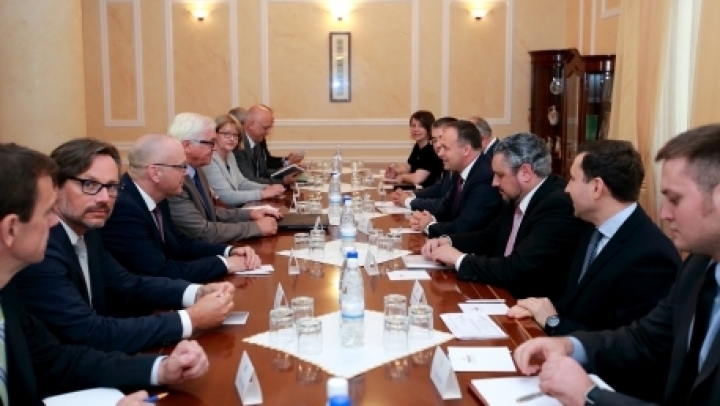 The priorities of Germany’s OSCE chairmanship and the trust building measures in settling the Transnistrian conflict have been discussed at the meeting of Moldovan speaker Andrian Candu and Germany’s Foreign Minister Frank-Walter Steinmeier, the chairman-in-office of the OSCE.

Andrian Candu has expressed gratitude for the contribution of the German chairmanship of the OSCE in resuming the 5+2 format talks, after a two-year break. The speaker has said Moldova’s reintegration issue is high on the Parliament’s agenda. There is political will to go further in identifying solutions for the settlement of the Transnistrian conflict, especially practical solutions for the citizens from both banks of the Nistru river.

Andrian Candu has also spoken about the Parliamentary Platform on implementing the policy of Moldova’s reintegration meant to offer political support to the negotiators. According to the Speaker, the Platform’s priorities aim at drafting a series of documents: the concept of the special status, transitory legislation to strengthen the negotiators’ competences and other possible actions put down on a roadmap for the regulation of the Transnistrian conflict.

The Legislature President has pointed out that developing the roadmap of the reforms agenda has mobilized the political class to pass laws related to finances and banking, the energy sector and the fight against corruption till the end of the month.

Frank-Walter Steinmeier has encouraged the Parliament’s constructive approach and appreciated the Moldovan authorities’ progress in identifying concrete solutions to implement the steps from the Berlin protocol.