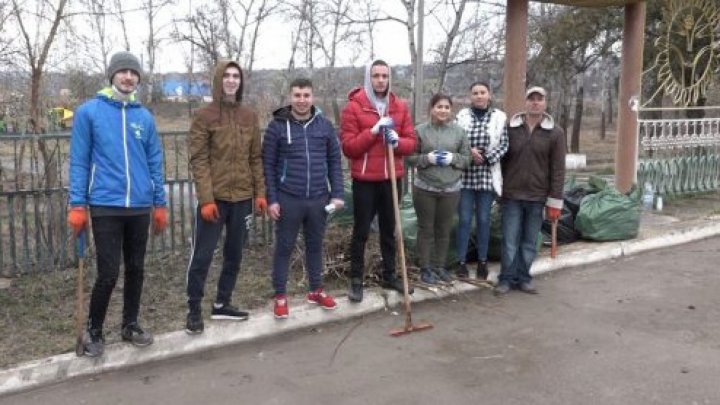 The journalists of of Nisporeni Canal 2 team left the microphones, pens and video cameras and cleaned the central park of the town. In only a couple of hours, they gathered 15 garbage bags. This is how they started a challenge that is famous in the on-line environment.

After they worked for a whole week, the reporters of Canal 2 Nisporeni removed the trash from the central park.

"I think that due to this activity we will show a good example for everybody. I hope that all the people will start doing something good", said Maria Popa, Canal 2 reporter.

"I think that this action is very good for the city and especially for this park", mentioned Constantin Homelco, CANAL 2 Nisporeni video editor.

The journalists gathered the leaves, cleaned the trees. As a consequence, dozens kilos of garbage was gathered. Some of the participants at the sanitation work recognized that last time they attended such events was when they were teens.

"When I first entered in this park I knew I last attended such actions when I was a kid", said Lia Basoc, CANAL 2 Nisporeni reporter.

"I am thankful for accepting this challenge. There are a lot of places that need to be cleaned", mentioned Mariana Triboi Canal 2 reporter.

"This is a very good challenge for us, because there a lot of pouted places in Moldova. We urge all the people to attend these actions and clean the environment", said Ion Farima, Canal 2 Nisporeni journalist.

At the end the journalists team urged all the residents of Nisporeni to get involved in these actions.