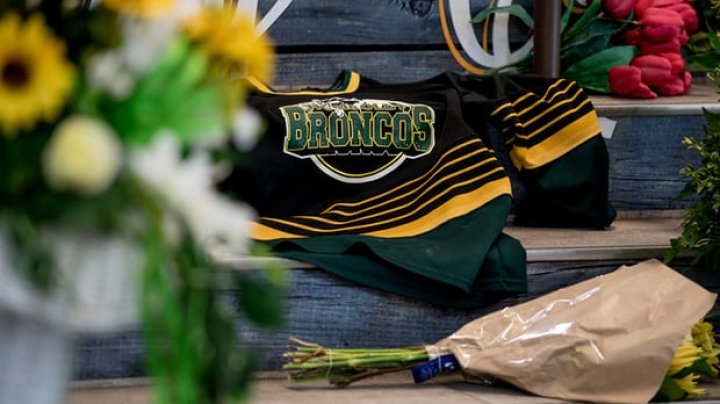 Canada has been plunged into “shock and mourning” after 15 people died and more than a dozen were injured in a “nightmare” collision between a bus carrying a junior hockey team and a semi-trailer.

The royal Canadian mounted police said 29 people, including the driver, were on the Humboldt Broncos team bus when the crash occurred late on Friday afternoon on a rural highway some 200km north-east of Saskatoon in the province of Saskatchewan.

The team had been heading to a Saskatchewan junior hockey league playoff game against the Nipawin Hawks, officials said.

The crash has shocked hockey-crazed Canada, where sports teams often travel hours in gruelling winter conditions. Within hours of the launch of a fundraising campaign to help those affected by the crash, it had raised more than C$2.4m, far exceeding its initial target of C$10,000.

“An entire country is in shock and mourning,” the country’s prime minister, Justin Trudeau, said. “This is every parent’s worst nightmare. No one should ever have to see their child leave to play the sport they love and never come back.”

The International Ice Hockey Federation said a moment of silence would be observed during upcoming games between Poland and Estonia, and Latvia and Kazakhstan.

In the National Hockey League, the Calgary Flames put up a Broncos team photo in their locker room while the the Philadelphia Flyers held a moment of silence before their game against the New York Rangers.

On Saturday the Broncos’ home arena in Humboldt became an impromptu crisis centre, bringing together mourners, fans and locals who knew the team’s coaches and players, who hail from across western Canada and range in age from 16 to 21 years. The stairs of the rink were turned into a makeshift memorial. Flowers were placed alongside railings wrapped in the team’s colours of yellow and green.

The Broncos president, Kevin Garinger, described the deep shock in the community. The Broncos were a close-knit team who were well-known in the small farming community of 6,000 where they played, he said.

“We are stunned and grieving,” he told a news conference on Saturday. “Everything about this tragedy is unprecedented.”

While police are yet to release the names of those killed in the crash, social media lit up with tributes to those reportedly killed. Darcy Haugan, the head coach described as an incredible mentor to the team’s young players, Logan Schatz, the captain who had led the team for more than two of his four years on the team, and Jaxon Joseph, one of the team’s leading scorers, were among those named.

An announcer and reporter with a local radio station, Tyler Bieber, was also reportedly among the killed. Those injured in the crash were transported to hospitals in Saskatoon, some with critical injuries, police said. The truck driver was not injured in the crash.

A photo tweeted early on Saturday showed three of the team’s players lying side-by-side in hospital beds, hands clasped together. The caption said the three were “bonding and healing”.

Garinger said the team’s energies were now focused on the needs of the players and families. “We are heartbroken and completely devastated by the tragedy that occurred yesterday,” he added. “We will never forget 6 April 2018. We will never forget the members of our Broncos family who were taken from us … We will persevere and we will honour the souls who were lost.”

Images from the scene suggested the force of the crash had torn the bus in two, leaving debris scattered in the snow-covered fields that line the highway. The semi-trailer sat nearby, overturned.

Police said it was too early to determine the cause of the collision. After initially detaining the truck driver, police released him and provided him with psychological support.

Officials in Humboldt said they were planning a vigil on Sunday in the hockey arena where the Broncos had been scheduled to take on the Hawks.

“This is truly a dark moment for our city and our community and our province,” said Rob Muench, mayor of Humboldt, wearing a green and yellow Broncos jersey.

“Throughout Canada we see teams going out into the Canadian winters on buses all the time,” he said. “It’s always a thought in parents’ and fans’ minds about what could happen. And unfortunately this happened here in Humboldt.”